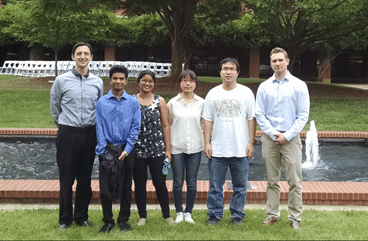 Researchers in North Carolina State University’s Department of Electrical & Computer Engineering have developed a model that allows antenna designers to identify efficient configurations for antenna designs in minutes, rather than days.

Researchers in North Carolina State University’s Department of Electrical & Computer Engineering have developed a model that allows antenna designers to identify efficient configurations for antenna designs in minutes, rather than days. The model is designed to expedite development of next generation “multi-input, multi-ouput” (MIMO) antennas, which allow devices to get more use out of the available bandwidth.

“Our model produces nearly optimal results, and should save designers an enormous amount of time in reaching results that can be used to create prototypes or that could be refined using conventional modeling techniques,” says Jacob Adams, an assistant professor of electrical and computer engineering at NC State and senior author of a paper on the work.

In a MIMO system, multiple transmitters can send data on the same frequency but along different spatial paths. Multiple receivers can distinguish between those multiple streams of data based on the uniqueness of the paths that the radio waves take to the multiple receivers. This type of system requires MIMO antennas which are often planar, or flat, and are found in everything from smartphones to satellite arrays. The point at which a transmitter and receiver connect to the antenna is called a port. If a MIMO system is using two ports, it can double the amount of data being transmitted. And you can achieve greater benefits by using more ports.

This is important because competition for available bandwidth is fierce. Commercial and military communication services must broadcast and receive information via the finite spectrum of radio frequencies, even as consumers are calling for faster download speeds for their personal devices.

However, implementing the MIMO concept in small, mobile devices can pose significant design challenges. That’s because the ports can “couple,” or interact, when they are placed too close together – making it effectively impossible for them to differentiate between the signals they are receiving from the transmitters.

Designing a MIMO antenna and choosing the best location for each port on a MIMO antenna can be time consuming, because each possible configuration of ports requires designers to calculate how the configuration would affect all of the ports. And the problem increases by an order of magnitude for every additional port used in the design.

The researchers addressed this problem by creating an approximate model that does two things. The model calculates the performance of each probe point in regard to its efficiency in sending and receiving information. The model also tells users the extent to which each configuration of probes causes the individual probes to couple.

The paper, “Computing and Visualizing the Input Parameters of Arbitrary Planar Antennas Via Eigenfunctions,” is published online in the journal IEEE Transactions on Antennas and Propagation. Lead author of the paper is Binbin Yang, a Ph.D. student in Adams’s lab. The work was supported by the National Science Foundation’s Enhancing Access to the Radio Spectrum program, under grant number 1343309.