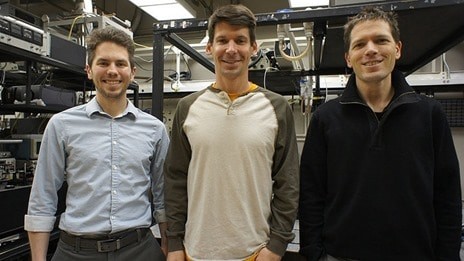 In a partnership melding neuroscience and electrical engineering, researchers from UNC-Chapel Hill and NC State University have developed a new technology that will allow neuroscientists to capture images of the brain almost 10 times larger than previously possible.

In a partnership melding neuroscience and electrical engineering, researchers from UNC-Chapel Hill and NC State University have developed a new technology that will allow neuroscientists to capture images of the brain almost 10 times larger than previously possible – helping them better understand the behavior of neurons in the brain.

Nervous systems are complex. After all, everything that any animal thinks or does is controlled by its nervous system. To better understand how complex nervous systems work, researchers have used an expanding array of ever more sophisticated tools that allow them to actually see what’s going on. In some cases, neuroscience researchers have had to create entirely new tools to advance their work.

This is how an electrical engineering researcher ended up co-authoring a Nature Biotechnology paper with a group of neuroscientists.

A UNC-Chapel Hill research team made up of Jeff Stirman, Ikuko Smith and Spencer Smithwanted to be able to look at “ensemble” neuronal activity related to how mice process visual input. In other words, they wanted to look at activity in neurons across multiple areas at the same time.

To do that, the researchers used a two-photon microscope, which images fluorescence. In this case, it could be used to see which neurons “light up” when active.

The problem was that conventional two-photon microscopy systems could only look at approximately one square millimeter of brain tissue at a time. That made it hard to simultaneously capture neuron activity in different areas.

This is where Michael Kudenov comes in. An assistant professor of electrical and computer engineering at NC State, Kudenov’s area of expertise is remote imaging. His work focuses on developing new instruments and sensors to improve the performance of technologies used in everything from biomedical imaging to agricultural research.

After being contacted by the UNC researchers, Kudenov designed a series of new lenses for the microscope. Stirman further refined the designs and incorporated them into an overall two-photon imaging system that allowed the researchers to scan much larger areas of the brain. Instead of capturing images covering one square millimeter of the brain, they could capture images covering more than 9.5 square millimeters.

This advance allows them to simultaneously scan widely separated populations of neurons.

As the group notes in its Nature Biotechnology paper, this work addresses “a major barrier to progress in two-photon imaging of neuronal activity: the limited field of view.”

The paper, “Wide field-of-view, multi-region, two-photon imaging of neuronal activity in the mammalian brain,” was published June 27 in the journal Nature Biotechnology.