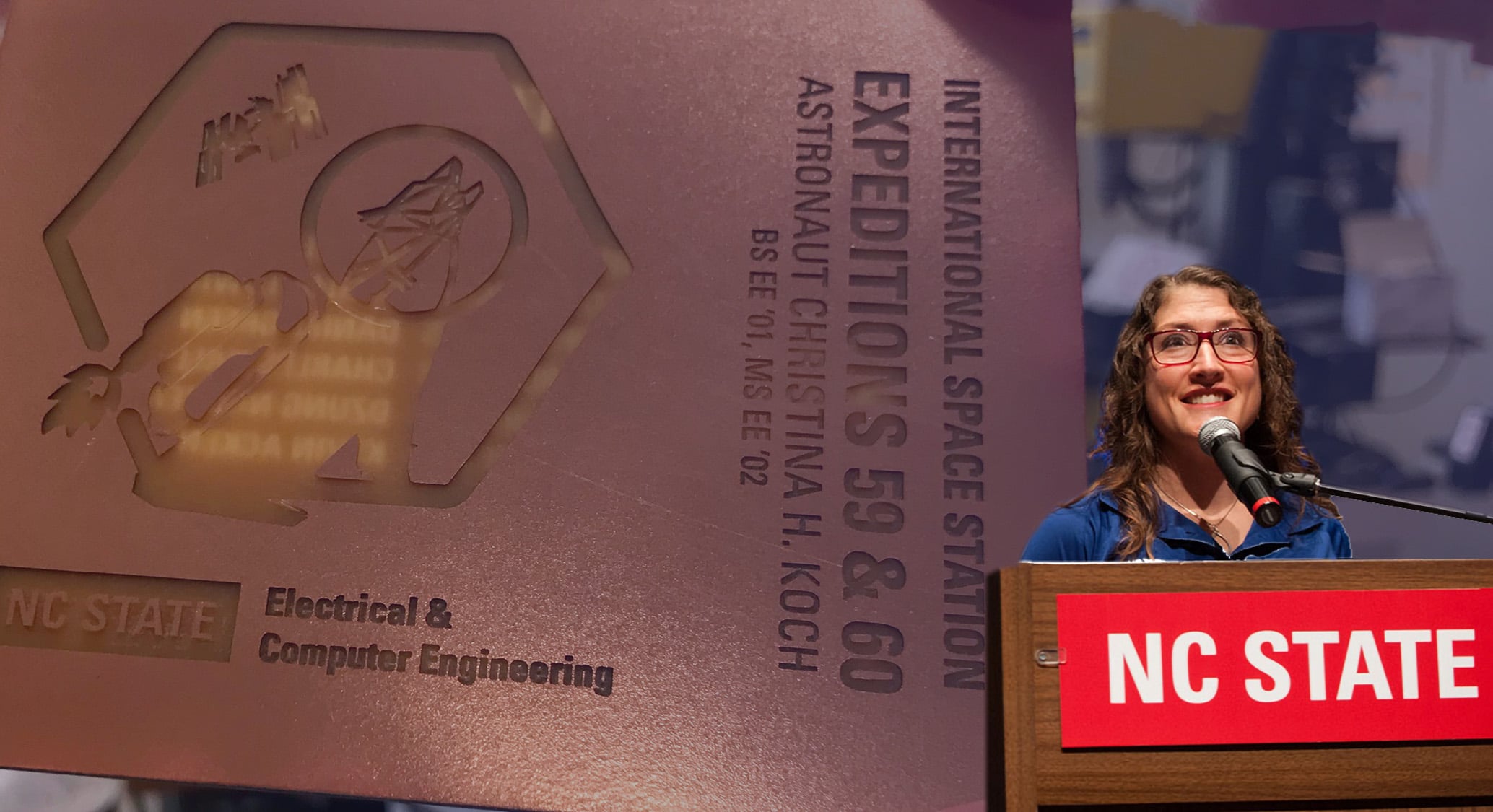 If all goes as planned on ISS Expedition 59, she’ll celebrate the 50th anniversary of the Apollo 11 moon landing in space.

It will be the culmination of nearly six years of training since she was selected to be one of NASA’s eight astronauts in the Class of 2013. It hasn’t been easy – especially the part where she had to become fluent in Russian so she could communicate with the cosmonauts on board for what is expected to be a six-month stay on orbit some 240 miles above Earth’s surface. Custom-made circuit board featuring the spacewalk-equipped ECE “Circuit Wolf” made in the ECE MakerSpace, traveling with Christina Koch to the International Space Station.

She’ll conduct experiments on various subjects, including herself, with some general maintenance work and only a little time to herself.

She’ll take a few trinkets for the two state institutions where she received the bulk of her education before she entered the space program, the North Carolina School of Science and Math and NC State. Koch will be carrying a custom designed printed circuit made in the ECE MakerSpace featuring an astronaut version of the “Circuit Wolf” icon.

It will be the first all-female crew to conduct a spacewalk in the 21-year history of the ISS.

A Michigan native who grew up in Jacksonville, North Carolina, Koch says she didn’t have a lot of female role models in science in her youth. But her heroes told her to think big and her family never discouraged her from pursuing her adolescent dream to one day go to space.

That will happen at exactly 3:14 p.m. Thursday, March 14, from the Baikonur Cosmodrome in southern Kazakhstan. Students, faculty and staff can attend a launch viewing event in room 1021 in Engineering Building II on Centennial Campus.

Before she left Star City, Russia, for a week in quarantine, Koch answered a few quick questions from her alma mater.

Time to go – how are you dealing with any of the butterflies you may have about the upcoming launch?

Over the past six years, our training has been such that we learn to handle those types of nerves really well. As I say often, I like to turn those nerves into a focus. With the training crew we have, I feel very confident. We had final exams last week, so a lot of work went into making sure we had our teamwork and our technical knowledge buttoned up. I couldn’t feel more ready, on a crew level, personal level and a technical level.

Final exams? Hopefully, NC State prepared you to do well on those.

I would say NC State prepared me very well. I can definitely remember my final exams there as well.

Do you have friends and family going with you to Kazahkstan for the launch?

I do, including some friends from North Carolina as well as people from Texas. There is another group who get to watch from NASA Mission Control in Houston. I’m looking forward to knowing that my friends and family are there and that they know I am carrying their dreams with me. They all helped support me and get me where I am.

Are you taking anything with you from NC State and the North Carolina School of Science and Math?

I’m taking some small emblems of both up with me. I feel that they both prepared me so well that this is a little way for me to say “Thank you” for all that preparation and for the people who worked there that cared about my education and my development to get me where I am.

Obviously, this is the coolest job in the world, but it is still a job. How do you balance the enormity of the location with actually getting stuff done?

It is interesting, because your day is extremely planned. There is actually a piece of software that schedules our time down to the minute. Everything you need to do in a day is included in a package that makes it easy to execute. From the time you wake up, after you are done preparing for work, you are on the go and making sure your time is spent efficiently. That day can include maintenance on board, upgrades to the station, scientific activities and preparations for dynamic operations, like capturing a crew vehicle or spacewalk. There is not a dull moment. Sometimes on the weekends, some people will take some time to themselves to take pictures outside the windows and to keep in touch with friends and family. Some of my other time in remote places has prepared me for staying focused on the job.

You are launching in the middle of Women’s History Month. Put into perspective being a pioneering woman scientist.

It is a unique opportunity. I hope to be able to inspire folks who might be watching. As I grew up in Jacksonville, North Carolina, there weren’t necessarily a lot of engineers that I saw on a daily basis. Somehow, though, I got it into my head that I wanted to be an engineer. So I hope I can be an example to people who might not have someone to look at as a mentor that it doesn’t matter where you come from or what examples there might be around you, you can achieve whatever you’re passionate about. If that’s a role I can serve, it will be my honor to do so.

You will be the first former Technician photographer to take a picture of every person on Earth. Do you plan to share on social media some of what it looks like to be in space? [@Astro_Christina on Twitter and @astro_christina on Instagram.]

I do plan to do social media, to share the journey and to contribute to the outreach of all the great work going on onboard. I will definitely have the camera out. I am still an avid photographer and I’m looking forward to catching some shots of Raleigh and Durham.