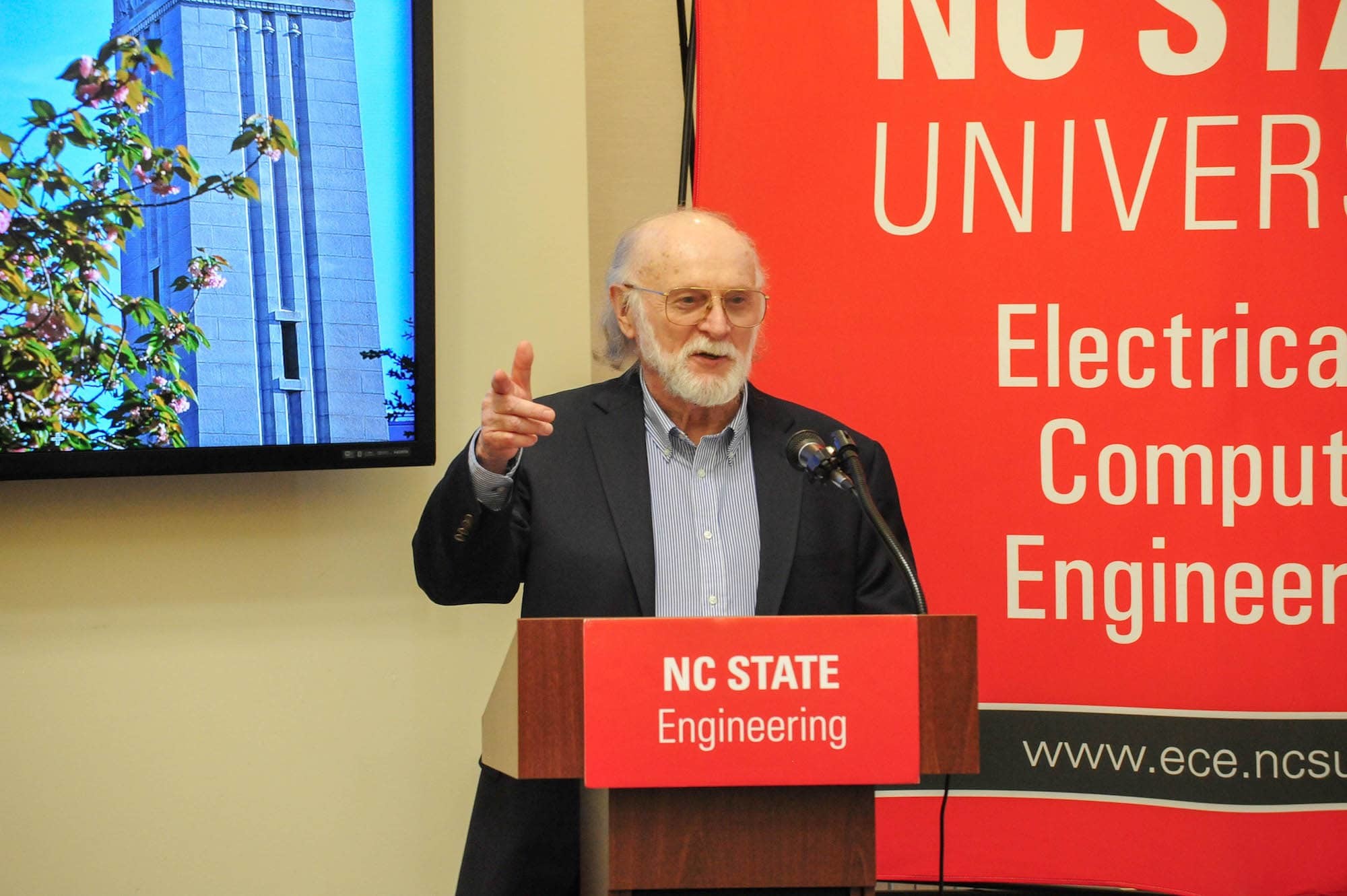 Dr. Trew gives remarks at his retirement party in December 2018.

We mourn the loss of Dr. Robert Trew, Alton and Mildred Lancaster Distinguished Professor (Emeritus) and former head of ECE, who sadly passed away on Feb. 24. A celebration of his life will be held Mar. 30.

Dr. Robert James Trew, Alton and Mildred Lancaster Distinguished Professor (Emeritus) and former head of the Department of Electrical and Computer Engineering in NC State’s College of Engineering, passed away on Feb. 24, 2019.

Born on Dec. 8, 1944, Trew was the son of Robert and Phyllis. He is survived by his wife, Diane, and daughters Heather and Robin.

Trew made important contributions to research on semiconductor devices and microwave computer-aided design, and he was a highly regarded mentor and leader. He started at NC State as an assistant professor in 1978. Throughout his distinguished career, he held high-level positions at universities and in the government.

He was a department head for a collective 11 years at three major research universities: Case Western Reserve University, Virginia Polytechnic Institute and State University and NC State. From 1989 to 1997, while working at NC State and then Case Western, Trew was also the program manager for the U.S. Army Research Office at Research Triangle Park. He served as vice-chair of the interagency committee that planned and implemented the U.S. Nanotechnology Initiative, which began in 2000. For four years, from 1997 to 2001, Trew was the director of research for the Office of the Secretary of Defense at the U.S. Department of Defense, where he oversaw a $1.3 billion annual budget for basic research programs.

In 2003, Trew became the ECE department head at NC State for five years. He remained at the College as a professor while also working as the director of the National Science Foundation’s Division of Electrical, Communications and Cyber Systems from 2009 to 2013. He retired from NC State in December 2018.

Trew received many awards and honors throughout his career, including the 2017 Institute of Electrical and Electronics Engineers (IEEE) Microwave Theory and Techniques Society Career Award; the 2016 IEEE Rudolph E. Henning Distinguished Mentor Award; and the 2014 IEEE Microwave Theory and Techniques Society Pioneer Award. He was also a Life Fellow of the IEEE and an elected Fellow of the American Association for the Advancement of Science. Trew served as editor-in-chief of multiple journals and publications. He has 12 patents and is the author of the book “Get Funded: An Insider’s Guide to Building an Academic Research Program.”

A celebration of Trew’s life will be held March 30 in Raleigh. His obituary is posted here.