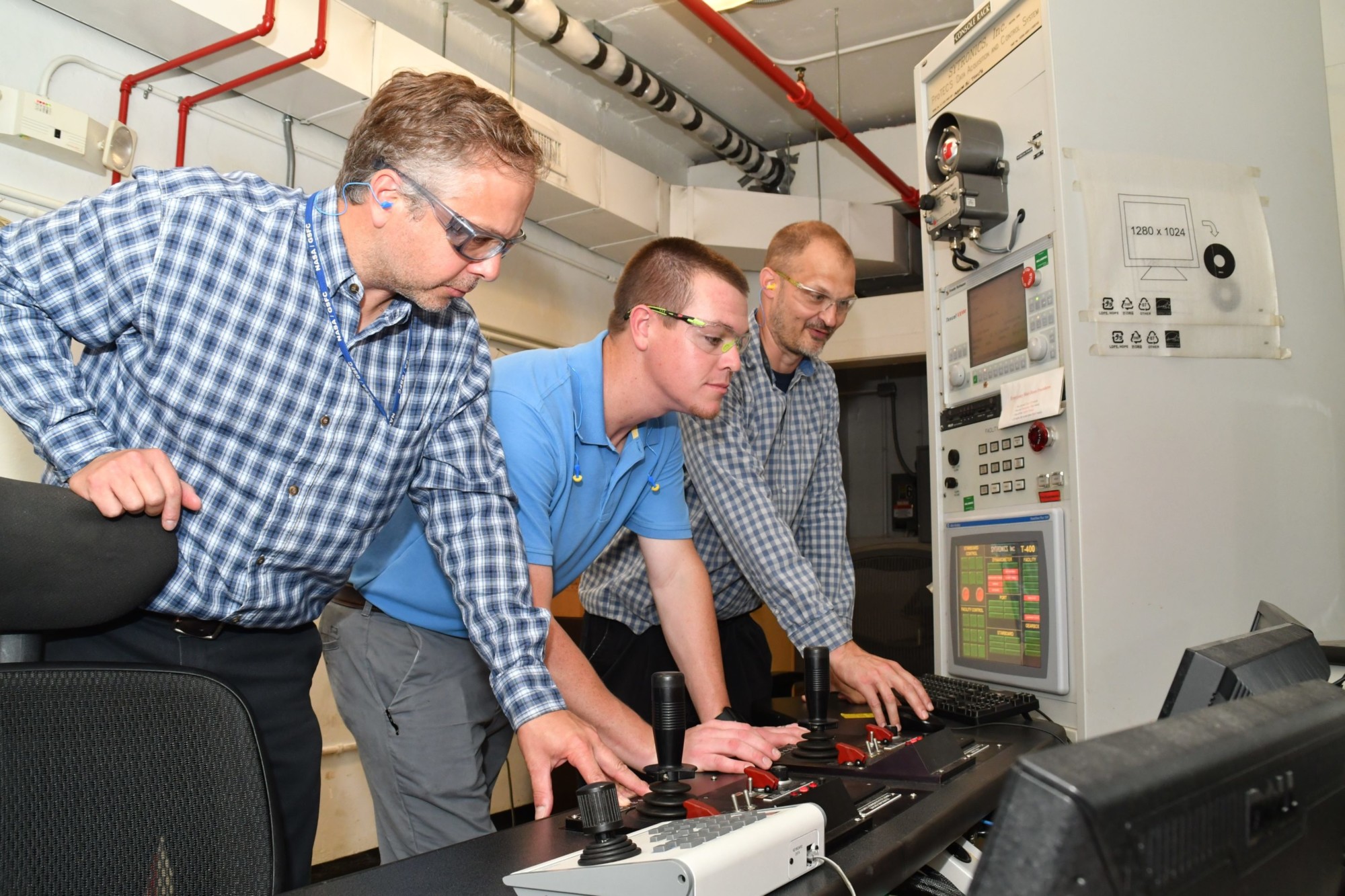 A group of Fleet Readiness Center East (FRCE) engineers earned recognition for their skilled technical problem-solving during a June 16 ceremony honoring the 2022 Dr. Delores M. Etter Top Scientists and Engineers of the Year.

North Carolina State University State Electrical and Computer Engineering alumnus, Josh Guthrie and teammates Neil Taylor, and Jordon Barnes (BS in ME 2018) – all members of the FRCE Test Equipment Engineering Branch’s engine support team – won a team award in the highly competitive program for their work in sustaining the test cells vital to aircraft engine production at the depot. They received the award during an event held at the Naval Surface Warfare Center in Carderock, Maryland.

Presented annually by the Assistant Secretary of the Navy Research, Development and Acquisition (ASN RD&A), the prestigious Etter Awards recognize technical superiority, innovation, technical merit, operational impact and applicability to ASN RD&A priorities. The award is named for the Honorable Delores M. Etter, Ph.D., who served as U.S. deputy undersecretary of Defense for Science and Technology from 1998-2001 and ASN RD&A from 2005-2007.

“I’m so pleased to see our engineers recognized for the vital work they do in sustaining naval aviation readiness,” said FRCE Commanding Officer Capt. James M. Belmont. “It’s a testament to their skill and ingenuity in creative problem-solving, their dedication and determination, and to efforts made every day by engineers and artisans across our depot that help keep our warfighters prepared and flight lines equipped.”

The team earned the award for its efforts to sustain the test cells that support legacy platforms serviced by FRCE, including the H-53 heavy-lift helicopter’s T64 engine; the AV-8B Harrier’s F402 engine; and the T58 engine, which powers the VH-3D Sea King, the helicopter that serves as the U.S. president’s Marine One transport. These particular aircraft are nearing the end of their planned lifecycles – an event commonly referred to as “sundowning” in military aviation – which can make it more challenging to find the materials needed to perform maintenance and repairs on the test cells. In many instances, the team has been required to reverse engineer software and hardware to get the job done, because the needed material isn’t always available through traditional supply lines.

“I think this award helps show the importance of the technical work we do here at FRCE in the sustainment of warfighter programs,” Hinson said. “A lot of times, these types efforts don’t really get recognized at this high level because they’re not the shiny, new thing – we’re maintaining the older platforms, and the work is still very, very needed.”

Hinson said the engine test support team is so good at its job, even colleagues within the depot might not understand the complexity of their work.

“A lot of people would never even know the type of challenges we can face with those test cells, because we keep producing engines,” he said. “The folks in production definitely give me feedback on what a good job these guys are doing. They definitely sing their praises.

“But to the team, it’s just what they do day-in and day-out,” Hinson continued. “They don’t really think about what a big deal it is that they’re working with a piece of equipment that’s 20 years old, and the original equipment manufacturer doesn’t make it anymore, and they’re trying to figure out ways to reverse engineer it, fix it and get it back up and running again, and the implications that has for the warfighter. It’s definitely a very unique and very specific skill set, and it’s easy to rely on these guys because they are so talented and know exactly what to do.”

The three engineers said they were honored by the recognition of their efforts, but also felt the award was representative of the multidisciplinary work done daily by various teams across FRCE. The teamwork spans several of the depot’s departments, including their own Maintenance, Repair and Overhaul (MRO) Engineering, Facility and Infrastructure Management, and MRO Production.

“There’s a lot of institutional knowledge wrapped up in the workforce here – it could be an artisan running the test stand, it could be a maintenance guy who’s been maintaining it for decades. Nobody works in a vacuum, especially not in test equipment,” Taylor said. “Everybody kind of pulls together; we interface with the component engineers, the aircraft guys, the calibration and metrology folks, the artisans, production people and the maintenance people. We might bring everybody together to come to some of these solutions. We work with all these different groups, and people pull off miracles around here nearly every single day.”

In the end, NC State alumnus Guthrie said, the recognition means the engine test support team is doing its job as part of the larger FRCE mission.

“When we got the notification, I could immediately think of 12 other people who deserve this award more than I do. It’s humbling,” he said. “But everything we do is in support of the engine shop, and the guys and gals down there. They’re incredibly easy to support, and when you work with them and get to know them well, it’s easy to want them to succeed. We’re just one small cog in a big machine.”