The hard spheres gas (or in two dimensions, hard disks) has long been studied in the context of statistical mechanics as a fundamental model of matter. Many computer simulations have suggested that there is a liquid-solid phase transition, but so far little is known mathematically. I will survey various recent results on understanding the underlying configuration spaces and changes in the topology as the radius of the disks varies.

This talk will include joint work with several others, including Gunnar Carlsson and Jackson Gorham, Yuliy Baryshnikov and Peter Bubenik, and Bob MacPherson. 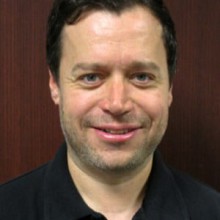 Matthew Kahle completed his PhD in mathematics at the University of Washington in 2007. Since then he has held postdoctoral fellowships at Stanford and IAS, and he will be starting as an Assistant Professor at Ohio State this fall. He is broadly interested in interactions of topology and geometry with probability, statistical mechanics, and combinatorics.