The study of strongly correlated electronic systems and the development of quantum transport in nanoelectronic devices have followed distinct, mostly non-overlapping paths. Electronic correlations of complex materials lead to emergent properties such as superconductivity, magnetism, and Mott insulator phases. Nanoelectronics generally starts with far simpler materials (e.g., carbon-based or semiconductors) and derives functionality from doping and spatial confinement to two or fewer spatial dimensions. In the last decade, these two fields have begun to overlap. The development of new growth techniques for complex oxides have enabled new families of heterostructures which can be electrostatically gated between insulating, ferromagnetic, conducting and superconducting phases. In my own research, we use a scanning probe to “write” and “erase” conducting nanostructures at the LaAlO3/SrTiO3 interface. The process is similar to that of an Etch-a-Sketch toy, but with a precision of two nanometers. A wide variety of nanoscale devices have already been demonstrated, including nanowires, nanoscale photodetectors, THz emitters and detectors, tunnel junctions, diodes, field-effect transistors, single-electron transistors, superconducting nanostructures and ballistic electron waveguides. These building blocks may form the basis for novel technologies, including a platform for complex-oxide-based quantum computation and quantum simulation. 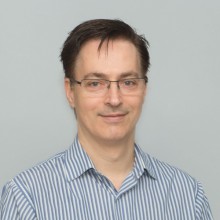 Distinguished Professor and Founding Director of the Pittsburgh Quantum Institute, University of Pittsburgh on February 4, 2020 at 9:00 AM in 200 Venture Place

Dr. Jeremy Levy is a Distinguished Professor of Condensed Matter Physics at the University of Pittsburgh in the Department of Physics and Astronomy, and Founding Director of the Pittsburgh Quantum Institute (http://pqi.org). He received an A.B. degree in physics from Harvard University in 1988, and a Ph.D. degree in physics from UC Santa Barbara in 1993. After a postdoctoral position at UC Santa Barbara, he joined the University of Pittsburgh in 1996. His research interests center around the emerging field of oxide nanoelectronics, experimental and theoretical realizations for quantum computation, semiconductor and oxide spintronics, quantum transport and nanoscale optics, and dynamical phenomena in oxide materials and films. He is a Class of 2015 Vannevar Bush Faculty Fellow, a Fellow of the APS and AAAS, a recipient of the 2008 Nano50 Innovator Award, and the NSF Career Award. He has received the University of Pittsburgh’s Chancellor’s Distinguished awards for research (2004, 2011) and teaching (2007).