Gallium nitride (GaN) nanoelectronics have operated at temperatures as high as 1000°C making it a viable platform for robust space-grade (“tiny-but-tough”) electronics and nano-satellites. In addition, there has been a tremendous amount of research and industrial investment in GaN as it is positioned to replace silicon in the billion-dollar (USD) power electronics industry, as well as the post-Moore microelectronics universe. Furthermore, the 2014 Nobel Prize in physics was awarded for pioneering research in GaN that led to the realization of the energy-efficient blue light-emitting diode (LED). Even with these major technological breakthroughs, we have just begun the “GaN revolution.” New communities are adopting this nanoelectronic platform for a multitude of emerging device applications including the following: sensing, energy harvesting, actuation, and communication. In this talk, we will review and discuss the benefits of GaN’s two-dimensional electron gas (2DEG) over silicon’s p-n junction for space exploration applications (e.g., radiation-hardened, temperature-tolerant Venus probes). In addition, we will discuss recent results that advance this nanoelectronic device platform for extreme-environment Internet-of-things (IoT) systems for combustion and down-hole monitoring. 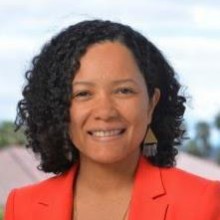 Associate Professor, Stanford University on August 28, 2020 at 11:00 AM in Zoom Webinar

Debbie G. Senesky is an Associate Professor at Stanford University in the Aeronautics and Astronautics Department and by courtesy, the Electrical Engineering Department. In addition, she is the Principal Investigator of the EXtreme Environment Microsystems Laboratory (XLab). Her research interests include the development of micro- and nano-scale sensors, high-temperature wide bandgap (GaN, SiC) electronics, and robust interface materials for operation within extreme harsh environments. She received the B.S. degree (2001) in mechanical engineering from the University of Southern California. She received the M.S. degree (2004) and Ph.D. degree (2007) in mechanical engineering from the University of California, Berkeley. In addition, she has held positions at GE Sensing (formerly known as NovaSensor), GE Global Research Center, and Hewlett Packard. In recognition of her work, she is a recipient of the Emerging Leader Abie Award from AnitaB.org, NASA Early Faculty Career Award, and Alfred P. Sloan Foundation Ph.D. Fellowship Award. More information about Prof. Senesky can be found at xlab.stanford.edu or on Instagram: @astrodebs.