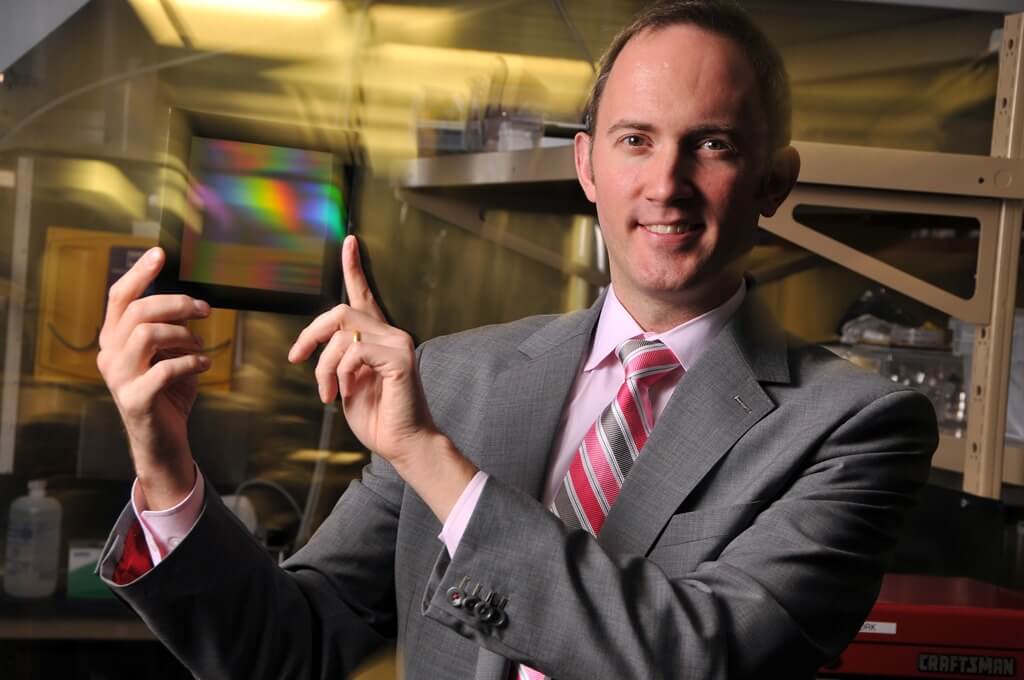 NC State held its 27th Celebration of Innovation and Entrepreneurship to recognize the outstanding achievements of its faculty inventors over the last year. With over 500 products to market and over 125 startups launched, NC State continues to contribute to the economy of North Carolina and the nation as a whole. In 2016, the Office […]

NC State held its 27th Celebration of Innovation and Entrepreneurship to recognize the outstanding achievements of its faculty inventors over the last year. With over 500 products to market and over 125 startups launched, NC State continues to contribute to the economy of North Carolina and the nation as a whole. In 2016, the Office of Technology Commercialization and New Ventures worked with NC State faculty to launch 12 startup companies, execute 164 commercialization agreements, issue 65 patents, and generate $3.8 million in licensing revenue.

Dr. Michael Escuti from the Department of Electrical and Computer Engineering was presented with NC State’s 2016 Innovator of the Year award. He is a leading photonics and electro-optic materials expert pioneering the development of polarization-independent devices and transformational diffractive optics. These technologies increase efficiency of optics, decreasing the amount of external interferences from external variables such as temperature or low-lighting.

The Innovator of the Year award isn’t just a title, as Escuti has made himself well-established in his work. He is a leading crystal and photonics specialist pushing the the innovation of polarization gratings and geometric phase holograms. He has also been recognized by the Presidential Early Career Award for Scientists and Engineers and has received the Alcoa Foundation Engineering Research Achievement Award.

Dr. Michael Escuti and “polarization gratings,” made of a thin layer of liquid crystal material on a glass plate.Escuti’s work is principally supported by the National Science Foundation (including a CAREER Award) and the US Air Force Research Laboratory, along with several strong partnerships with industry, including Raytheon, Boulder Nonlinear Systems, MZA Associates, and ImagineOptix. ImagineOptix, an NC State startup company, has also successfully commercialized a number of Escuti’s technologies. The company revolutionizes the field of optics within telecommunications and consumer electronics. His technology is currently installed in two of the world’s largest telescopes, enabling high contrast direct imaging and spectral characterization of exo-solar planets.

On top of that, Escuti has been named as inventor on 47 issued patents, and counting. “This is a splendid recognition of creativity, perseverance, and impact. Mostly from my students, postdocs, and industrial partners. We are pioneers in a landscape of uncharted optical components and photonics systems, all made possible by novel complex patterns in optically directional materials. It is exciting to explore this landscape while at NC State, one of the few places in the world where this type of innovation is possible. I am very grateful to the support of ImagineOptix and other industrial partners, as my department, college, and technology transfer office, making this possible over the last 12 years.”

NC State ECE congratulates Dr. Escuti on his remarkable performances and contributions. As a well-renown member of the department, Dr. Michael Escuti demonstrates the passion to Think and Do that our University seeks to uphold.