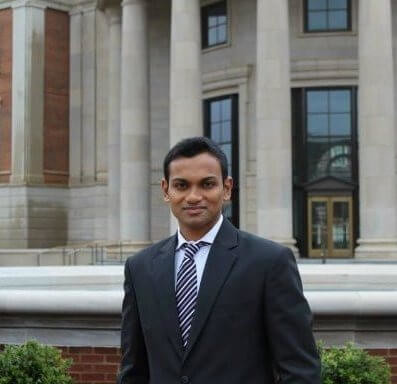 10 finalists in the Graduate School’s second annual 3 Minute Thesis competition will demonstrate who is most capable of describing their Ph.D. research in just three minutes and with only one slide. Ph.D. candidates who have completed their confirmation milestone, was narrowed to 10 finalists, including one from Electrical and Computer Engineering – Tanvir Arafat Khan.

Later this month, 10 finalists in the Graduate School’s second annual 3 Minute Thesis competition will demonstrate who is most capable of describing their Ph.D. research in just three minutes and with only one slide.

The preliminary rounds of the competition were Oct. 4-10. The field of competitors, all Ph.D. candidates who have completed their confirmation milestone, was narrowed to 10 finalists, including one from Electrical and Computer Engineering – Tanvir Arafat Khan.

Khan is a PhD Student in Electrical Engineering at NC State, advised by Iqbal Husain and Aranya Chakrabortty. He earned his Master’s Degree in Electrical Engineering from NC State in 2014 and he is also a research assistant at the NSF FREEDM Center. His research is focused on the control and power sharing of the distributed renewable energy system. Renewable energy systems that are integrated to power grid through power electronics converter can cause instability with high penetration, and effect that Khanis trying to solve.

Tanvir Khan, Electrical & Computer Engineering“I’m enjoying the competition and am excited to represent the ECE department in the finals,” expressed Khan. “3MT Thesis is a great platform for sharing the research ideas and results with general people which also helps the presenter to be a better communicator.”

Finals for the 3MT competition will be held Oct. 25, from 3-5 p.m., in the Duke Energy Center of Hunt Library, as part of NC State University’s Red & White Week. The event is open to the campus and general public. The audience itself will be called upon to choose the “People’s Choice” winner in the competition.

“Last year, we had a tremendous competition with our first 10 3MT finalists, and we look forward to seeing how well our second cohort of student competitors will fare,” said Dr. Maureen Grasso, dean of the Graduate School. Grasso brought the 3 Minute Thesis competition to NC State last year.

Contestants will be judged on comprehension and content, as well as engagement and communication. Videos and comments from last year’s winners are available here.

Cash prizes will be awarded for first place, $1,000; second place, $750; and for the People’s Choice winner (by audience vote), $500. The judges will determine first and second place winners.

The 3 Minute Thesis finals are free and open to the public. Hunt Library is located on Partners Way, NC State’s Centennial Campus, and several pay parking lots are located nearby. For directions, consult the interactive campus map.