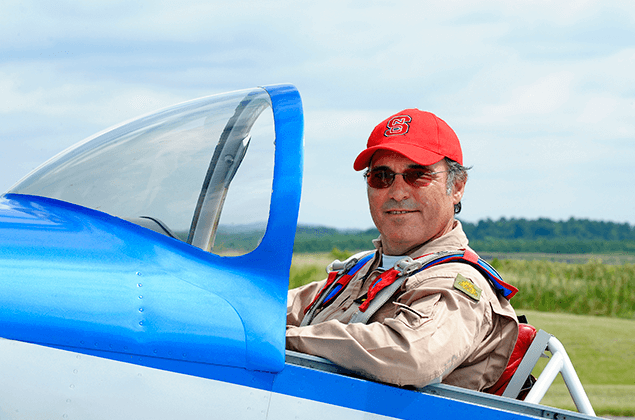 From the Outback to the Wolfpack

Dr. Paul Franzon learned to fly as a student in his university glider club, chasing kangaroos up and down the ridges of the Outback in south Australia. Today, you can catch a glimpse of him in the sky above Carter-Finley Stadium before the Wolfpack foo …

Dr. Paul Franzon learned to fly as a student in his university glider club, chasing kangaroos up and down the ridges of the Outback in south Australia. Today, you can catch a glimpse of him in the sky above Carter-Finley Stadium before the Wolfpack football team takes the field.

Franzon, Distinguished Professor of Electrical and Computer Engineering (ECE) and an instrument-rated commercial pilot, is a member of the Bandit Flight Team, a precision formation team that you might see passing over NASCAR races, sporting events, parades and festivals across North Carolina. The team is scheduled to appear at all seven of NC State’s home football games this fall.

Franzon pilots a Van’s RV-8, one of a line of kit-built experimental aircraft. The Bandit pilots fly RVs or Yaks, a line of Russian flight trainer aircraft.

On the day Franzon passed his check ride for a private pilot’s license, he caught a glimpse of an RV at the airport.

“I said that’s what a plane should look like,” he recalled. “Since then, I have gravitated toward that experimental end of aviation.”

Franzon became involved in the local RV community after receiving his power license in North Carolina in 1993. After being accredited for formation flying, he met a couple of local Yak pilots who needed more pilots to practice with in order to receive their formation license.

Dr. Paul Franzon in his RV-8 cockpitThe Bandit Flight Team was born, and NC State football was its first customer.

The Bandit formation passes over the packed stadium at the end of the pre-game National Anthem and makes another pass as the home team charges onto the field.

As a flight lead, Franzon must coordinate with a spotter on the ground who will relay when the marching band’s conductor climbs atop his perch to lead the Anthem performance. If the team is headed toward the stadium and things on the field are running behind, they must delay, doing S-turns in the skies above west Raleigh. It helps when a game is televised; that means things will run on schedule.

“The standard National Anthem is only one minute, 15 seconds,” he said. “So it’s a narrow window. You have to be at the right place a minute and fifteen out.”

As the planes fly over the stadium, they drip paraffin oil into the engine exhaust to create smoke. In recent years they have added colored smoke to the flight.

About half of the team members are former Air Force fighter pilots, some of whom have been commercial jet pilots. That includes Andy Stanaski, who earned a Ph.D. in electrical engineering from NC State after flying F-15s in the Air Force.

Franzon, who is head of the graduate program in ECE, enjoys the additional challenge of flying in formation. And being part of a team makes flying – usually a solitary endeavor – into a group activity.