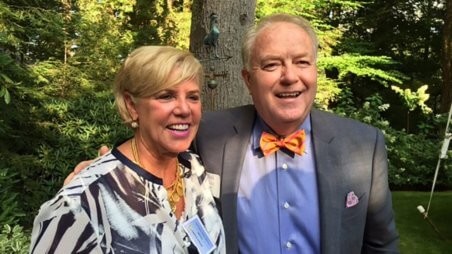 Supporting student veterans at NC State University is a cause close to Mark Carter’s heart. As a radar technician in the Marine Corps, Carter realized he had an aptitude for electronics and knew he wanted to further his education in NC State’s Departme …

Supporting student veterans at NC State University is a cause close to Mark Carter’s heart. As a radar technician in the Marine Corps, Carter realized he had an aptitude for electronics and knew he wanted to further his education in NC State’s Department of Electical and Computer Engineering.

Attending the university was not a certainty, but Associate Dean of the College of Engineering William Easter gave Carter a chance, helping him gain admission into the then-Department of Electrical Engineering (now ECE). It was an opportunity that shaped the rest of Carter’s life.

“I didn’t belong here at NC State if you looked at my grades from high school, but he saw something in me,” Carter said. “I owe him a huge debt – I’ll never be able to repay that man.”

Carter and his wife, Dawn – also a Marine Corps veteran – created the Mary Gammon Carter Scholarship Endowment in the College of Engineering in honor of his mother. The scholarship endowment was created to pay forward the opportunities stemming from Carter’s experience at NC State and to support undergraduate veterans at NC State studying engineering – particularly electrical engineering.

Mark and Dawn Carter“For the veterans here at NC State, don’t be afraid to try – you can do it. The military has taught you how to overcome obstacles and it’s also taught you a tremendous amount of confidence. Just believe in yourself that you can do it.”

Carter, one of the newest members of the ECE Hall of Fame, said he owes his career as an engineer to Easter, who gave him a chance to prove he could rise to the challenge of excelling at NC State.

“Mr. Easter and I talked about it being a difficult road for me once I was admitted and that it would be a lot of hard work, but I’m eternally grateful for whatever he saw in me,” Carter said.

Carter graduated with a B.S. in electrical engineering in 1987. He founded Wells Global – an engineering and construction company that designs and installs backup power systems for the federal government. Carter jokes to his employees that they all owe a debt of gratitude to Easter for admitting him into NC State in the first place.

“He was always on my mind because he’s the guy that made it happen for me. It was a small decision for him, but a big one to me,” Carter said. “I had lunch with Mr. Easter recently and I was able to tell him what a huge impact his decision made on my life. I also found out at that lunch that he was also a veteran, and had a soft spot for veterans.”

His military service and NC State education are the cornerstones that Carter credits with making possible his career in engineering.

“The military taught me confidence and the ability to get things done and at NC State, I had to apply those lessons to get through to graduation,” Carter said.

Forever grateful for those who helped him along the way, Carter feels a responsibility to give back to NC State and to support veterans who want to attend the university.

“A lot of people come out of high school and they don’t know what they want to do. The military gave me direction and gave me a sense of confidence to think ‘hey, I can go to NC State’ whereas I never would have thought that in high school,” Carter said. “It’s important not to lose sight that there are people out there who can do it and do it well, but they just need an opportunity.”

By establishing the Mary Gammon Carter Scholarship Endowment, Carter exemplifies how one gift can make all the difference in regard to a student’s future.

Carter said his mother, a textile worker with seven children, taught him the value of hard work and how to live with kindness and compassion for others. This is what ultimately led the Carters to create their endowment.

“My mother was a good southern woman who would give you the shirt off her back to help you. She always put other people’s needs before her own. I think she passed that down to me and my siblings,” Carter said. “She didn’t teach it to me directly, but showed me through example.”

Carter encourages other alumni to pay forward NC State’s significant impact on their lives by giving to the university.

“In a nutshell, NC State put us where we are today, and we should give back when we can.”

Carter is a member of the W.C. Riddick Giving Society and is a 2016 inductee to the Electrical and Computer Engineering Alumni Hall of Fame. His daughter, Catherine, is a junior studying fashion and textile management at NC State.