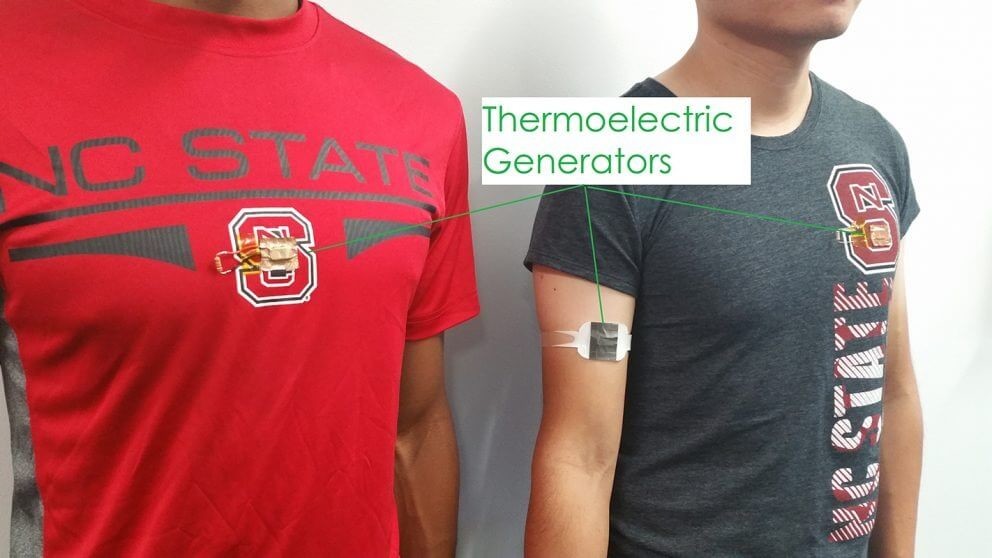 Researchers at North Carolina State University have developed a new design for harvesting body heat and converting it into electricity for use in wearable electronics. The experimental prototypes are lightweight, conform to the shape of the body, and c …

Researchers at North Carolina State University have developed a new design for harvesting body heat and converting it into electricity for use in wearable electronics. The experimental prototypes are lightweight, conform to the shape of the body, and can generate far more electricity than previous lightweight heat harvesting technologies.

The researchers also identified the optimal site on the body for heat harvesting.

“Wearable thermoelectric generators (TEGs) generate electricity by making use of the temperature differential between your body and the ambient air,” says Daryoosh Vashaee, an associate professor of electrical and computer engineering at NC State and corresponding author of a paper on the work. “Previous approaches either made use of heat sinks – which are heavy, stiff and bulky – or were able to generate only one microwatt or less of power per centimeter squared (uW/cm2). Our technology generates up to 20 uW/cm2 and doesn’t use a heat sink, making it lighter and much more comfortable.” TEG-embedded T-shirt (left) and TEG armband (right).The new design begins with a layer of thermally conductive material that rests on the skin and spreads out the heat. The conductive material is topped with a polymer layer that prevents the heat from dissipating through to the outside air. This forces the body heat to pass through a centrally-located TEG that is one cm2. Heat that is not converted into electricity passes through the TEG into an outer layer of thermally conductive material, which rapidly dissipates the heat. The entire system is thin – only 2 millimeters – and flexible.

“In this prototype, the TEG is only one centimeter squared, but we can easily make it larger, depending on a device’s power needs,” says Vashaee, who worked on the project as part of the National Science Foundation’s Nanosystems Engineering Research Center for Advanced Self-Powered Systems of Integrated Sensors and Technologies (ASSIST) at NC State.

The researchers also found that the upper arm was the optimal location for heat harvesting. While the skin temperature is higher around the wrist, the irregular contour of the wrist limited the surface area of contact between the TEG band and the skin. Meanwhile, wearing the band on the chest limited air flow – limiting heat dissipation – since the chest is normally covered by a shirt.

In addition, the researchers incorporated the TEG into T-shirts. The researchers found that the T-shirt TEGs were still capable of generating 6 uW/cm2 – or as much as 16 uW/cm2 if a person is running.

“T-shirt TEGs are certainly viable for powering wearable technologies, but they’re just not as efficient as the upper arm bands,” Vashaee says.

Study co-lead Haywood Hunter, shows off the TEG-embedded T-shirt at work.“The goal of ASSIST is to make wearable technologies that can be used for long-term health monitoring, such as devices that track heart health or monitor physical and environmental variables to predict and prevent asthma attacks,” he says.

“To do that, we want to make devices that don’t rely on batteries. And we think this design and prototype moves us much closer to making that a reality.”

The paper, “Wearable thermoelectric generators for human body heat harvesting,” is published in the journal Applied Energy. Lead authors of the paper are Melissa Hyland, a graduate student at NC State, and Haywood Hunter, an undergraduate at NC State. They worked on the project while undergraduates, with support from an NSF Research Experiences for Undergraduates grant. Co-authors include Jie Liu, a postdoctoral researcher at NC State; and Elena Veety, education director of ASSIST at NC State. The work was funded by the NSF under grants EEC-1160483, ECCS-1351533 and CMMI-1363485; and by the Air Force Office of Scientific Research under grant FA9550-12-1-0225.