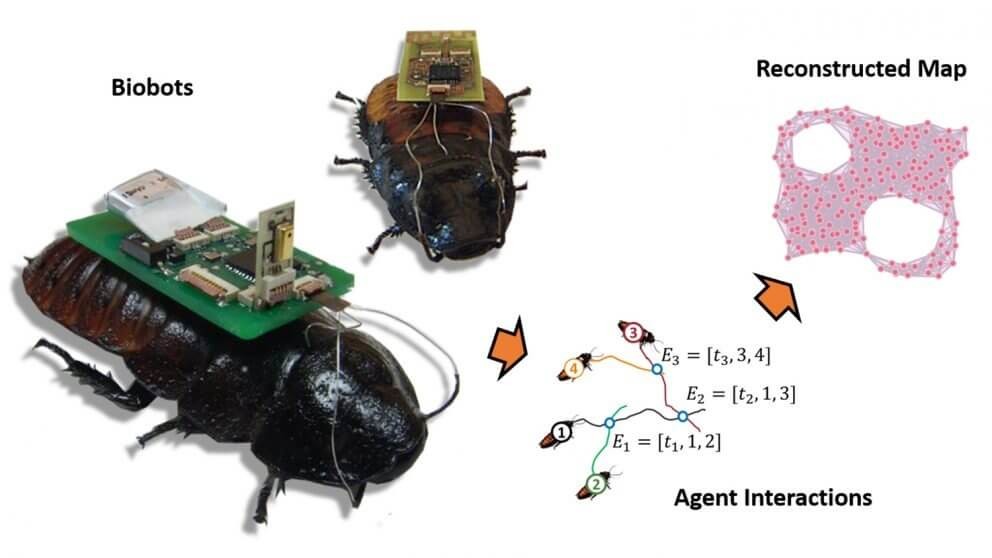 Tech Would Use Drones and Insect Biobots to Map Disaster Areas

Researchers at North Carolina State University’s Department of Electrical & Computer Engineering have developed a combination of software and hardware that will allow them to use unmanned aerial vehicles (UAVs) and insect cyborgs, or biobots, to ma …

Researchers at North Carolina State University’s Department of Electrical & Computer Engineering have developed a combination of software and hardware that will allow them to use unmanned aerial vehicles (UAVs) and insect cyborgs, or biobots, to map large, unfamiliar areas – such as collapsed buildings after a disaster.

“The idea would be to release a swarm of sensor-equipped biobots – such as remotely controlled cockroaches – into a collapsed building or other dangerous, unmapped area,” says Edgar Lobaton, an assistant professor of electrical and computer engineering at NC State and co-author of two papers describing the work.

“Using remote-control technology, we would restrict the movement of the biobots to a defined area,” Lobaton says. “That area would be defined by proximity to a beacon on a UAV. For example, the biobots may be prevented from going more than 20 meters from the UAV.”

The biobots would be allowed to move freely within a defined area and would signal researchers via radio waves whenever they got close to each other. Custom software would then use an algorithm to translate the biobot sensor data into a rough map of the unknown environment.

Once the program receives enough data to map the defined area, the UAV moves forward to hover over an adjacent, unexplored section. The biobots move with it, and the mapping process is repeated. The software program then stitches the new map to the previous one. This can be repeated until the entire region or structure has been mapped; that map could then be used by first responders or other authorities. “This has utility for areas – like collapsed buildings – where GPS can’t be used,” Lobaton says. “A strong radio signal from the UAV could penetrate to a certain extent into a collapsed building, keeping the biobot swarm contained. And as long as we can get a signal from any part of the swarm, we are able to retrieve data on what the rest of the swarm is doing. Based on our experimental data, we know you’re going to lose track of a few individuals, but that shouldn’t prevent you from collecting enough data for mapping.”

In their experiment, researchers released these robots into a maze-like space, with the effect of the UAV beacon emulated using an overhead camera and a physical boundary attached to a moving cart. The cart was moved as the robots mapped the area.

“We had previously developed proof-of-concept software that allowed us to map small areas with biobots, but this work allows us to map much larger areas and to stitch those maps together into a comprehensive overview,” Lobaton says. “It would be of much more practical use for helping to locate survivors after a disaster, finding a safe way to reach survivors, or for helping responders determine how structurally safe a building may be.

“The next step is to replicate these experiments using biobots, which we’re excited about.”

An article on the framework for developing local maps and stitching them together, “A Framework for Mapping with Biobotic Insect Networks: From Local to Global Maps,” is published in Robotics and Autonomous Systems. An article on the theory of mapping based on the proximity of mobile sensors to each other, “Geometric Learning and Topological Inference with Biobotic Networks,” is published in IEEE Transactions on Signal and Information Processing over Networks. The third co-lead author on both papers is Alireza Dirafzoon, a former Ph.D. student at NC State. The work was supported by the National Science Foundation under grant CNS-1239243.