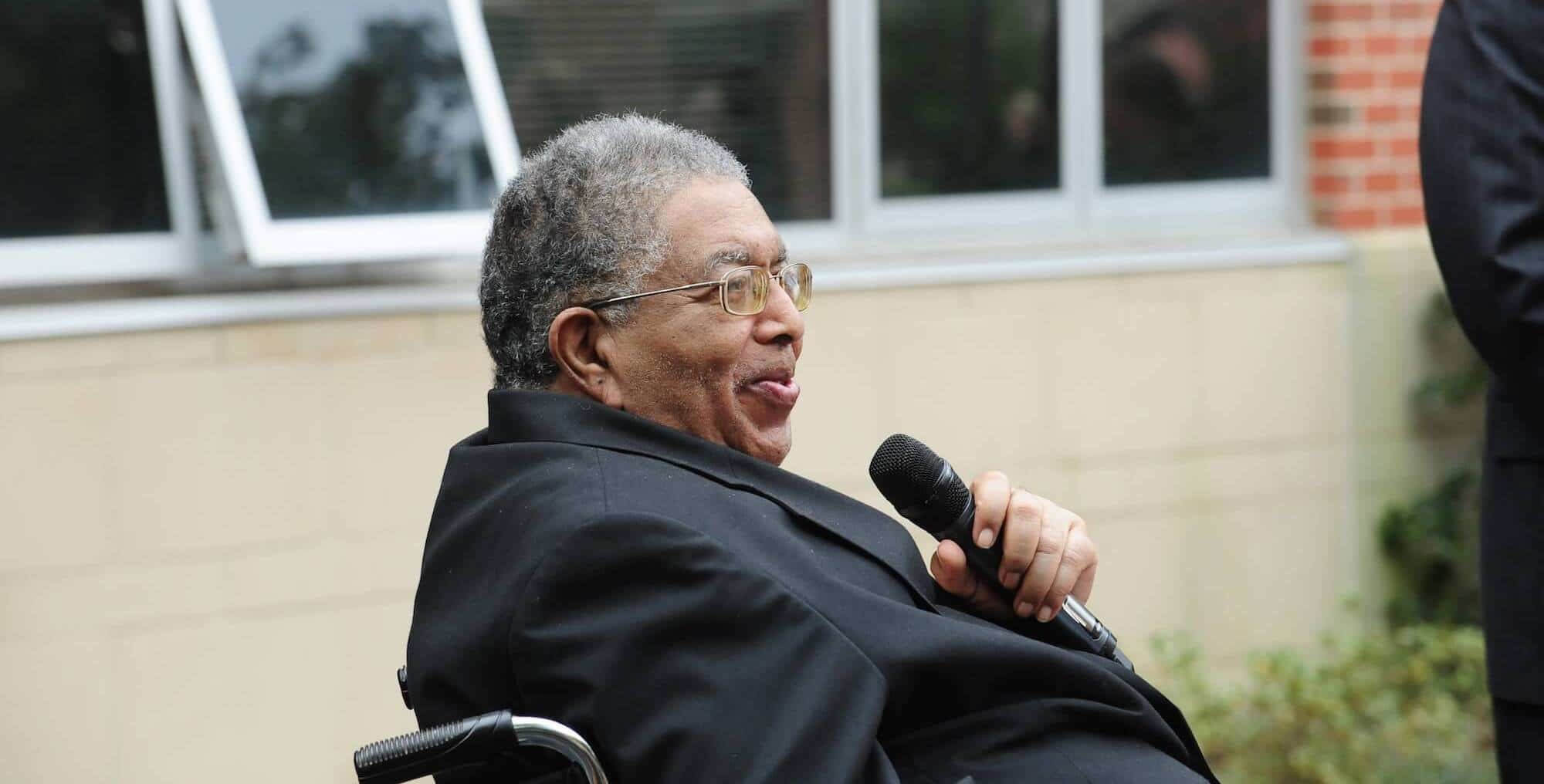 Irwin Holmes, speaking at the dedication of Holmes Hall.

At a ceremony hosted by Chancellor Woodson and Dean of Engineering, Louis Martin-Vega, one of the Department of Electrical and Computer Engineering’s distinguished alumni was honored with the dedication of Holmes Hall. Irwin R. Holmes, Jr. (BS EE 1960), who would go on to be involved in landmark pioneering computer projects before eventually retiring from IBM, was also notably the first African-American to receive an undergraduate degree from NC State. As one of a handful of African-American students who took those first bold steps to desegregate universities in the South, Holmes helped to open the doors to generations of students in the years to follow. Leading by example, he graduated with his Bachelor of Science degree in four years—certainly not always a common occurrence at the time—while pursuing athletics and becoming the first athlete to integrate the Atlantic Coast Conference (ACC) in his senior year as co-captain of the tennis team.

But as he expressed at the dedication ceremony on November 1, 2018, the questions of race and the pioneering steps of desegregation were not, to him, the main features of his time at NC State. Rather, the education he received and the support of his peers and faculty members that would set him onto his future careers were what stayed with him the most.

“The best person, as far as I’m concerned was a professor named William Stevenson,” recalled Holmes, speaking of ECE Professor William D. Stevenson, Jr. who was on the faculty from 1944 to 1977. “He did two things: He encouraged me to interview with RCA when they came on campus for interviews. When I went to the interview, the guy said, “are you Irwin Holmes?” I said, “yes,” and he said, “well, we’re giving you a job.” They sent me to Camden, New Jersey [and] Camden, New Jersey is where I found my wife. So I owed him double!”

Holmes went on, “But the kinds of jobs I got with my N.C. State degree were just magical.” He would go on to work with teams designing the first color television, a computer to provide vehicle and weapon guidance in a military tank, the airline reservation system for Trans World Airlines, and computer guidance systems that would put the first American in space. “But the most interesting one was a computer that was used to develop something called—maybe you heard of it—Internet, I think it is. They didn’t have any idea when we were doing that work, what the Internet was going to become,” Holmes chuckled. “All it was supposed to be was a system that tied together some of the largest government computers, so they could communicate and use each other. Nobody ever expected that all of you guys out here would be using the Internet for things nobody had ever heard of.”

“But through all of that, I can say none of that would have ever happened if we hadn’t had an NC State professor that decided in my senior year to put in place a class to teach someone how to build and design a computer,” Holmes described. “Until he did that, I had never heard of a computer, and I wasn’t interested in a computer. But out of that, followed the rest of my career.”

“So you can see that I may have contributed something to NC State, but NC State contributed a whole lot to me [and made me feel] so honored today. It’s almost icing on a cake for a special life that was put together by all these people whom we tend to forget about, that make NC State the special place it is.”