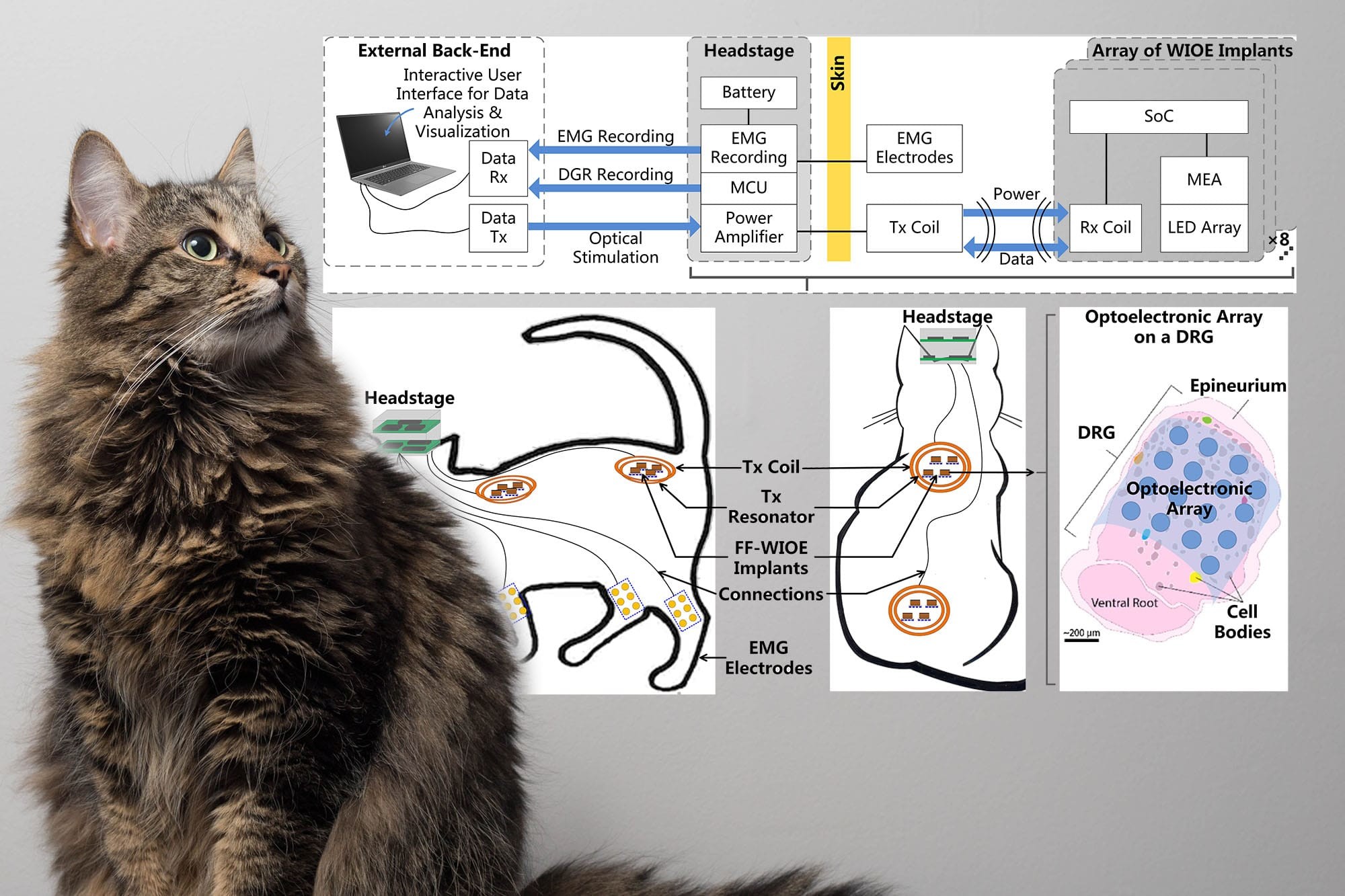 NC State’s Yaoyao Jia has been chosen to lead one of the new collaborative NSF programs, with a million-dollar grant aimed at improving our understanding of somatosensory feedback with the help of a cat.

NC State University has been chosen as the lead institution for one of the new collaborative National Science Foundation (NSF) programs—Integrative Strategies for Understanding Neural and Cognitive Systems (NCS). This million-dollar grant for “Intelligent Closed-Loop Neural Interface System for Studying Mechanisms of Somatosensory Feedback in Control of Functional and Stable Locomotion” will be led by NC State’s Yaoyao Jia, an assistant professor of electrical and computer engineering.

The awards contribute to NSF’s investments in support of Understanding the Brain and the BRAIN Initiative, a coordinated research effort that seeks to accelerate the development of new neurotechnologies.

Somatosensory feedback is the perception of sensations that we feel from our environment—touch, pressure, vibration, temperature, pain, and proprioception (where a body part exists in time and space). Our brains interpret that feedback and use the information to make cognitive decisions—whether to scratch an itch or jerk away from something burning. This feedback is vital for functional and dynamic movement, however, the mechanisms by which somatosensory feedback contributes to the coordination of muscle activity, limb dynamics, and body stability remain poorly understood. It is especially true for relatively large animals, like cats, whose limb inertia substantially affects limb dynamics, and the limb inertia must be compensated by precise muscle actions mediated by somatosensory feedback.

Thus, it is important to perform experiments using the cat model system as cat locomotor mechanics and neural control are mechanically closer to humans than rodents.

This project aims to investigate the mechanisms of somatosensory feedback from the spindle afferents of selected muscles on control of limb dynamics and dynamic stability in the cat model by developing an intelligent and closed-loop neural interface system. “If successful,” Jia noted, “the outcomes of this project and the developed methods will substantially enhance our understanding of the mechanisms of somatosensory locomotor control and contribute to developing novel therapeutic interventions for a sizeable population of people suffering from limb loss or sensory neuropathies.”

The major innovation of this project is that the researchers will for the first time perform selective and reversible activation and inhibition of spindle afferents in selected muscles of a relatively large animal (the cat) by applying optogenetic stimulation of the target neurons in an intelligent, closed-loop, and well-controlled manner.

“The next steps of the projects include designing and developing a wireless opto-electro neural interface platform,” explained Jia. These extremely small devices will be implanted in dorsal root ganglia (DRG) for high-channel-count neural recordings and optogenetic stimulations in a closed-loop manner. “[And then] designing machine learning algorithms to map DRG sensory activities to 4-limb locomotor kinematics and muscle activities for closed-loop control of optogenetic neuromodulation, and characterizing the role of hip spindle afferents in interlimb coordination and gait selection.”

If successful, the results of this project and the developed methods will substantially enhance our understanding of the sensory control of locomotion in large animal models.

Jia received her Ph.D. in Electrical and Computer Engineering from Georgia Institute of Technology in 2019. During her Ph.D. studies, she has built bi-directional neural interface devices for closed-loop neuromodulation, distributed mm-sized opto-electro stimulation implants, inductive power transmission systems for omnidirectional wireless power delivery, and smart data acquisition systems for enabling large wireless coverage and eliminating RF blind spots. She also worked on power management IC design during her M.S. in Microelectronics and Solid-State Electronics from the University of Electronic Science and Technology of China, Chengdu, China.

The U.S. National Science Foundation propels the nation forward by advancing fundamental research in all fields of science and engineering. NSF supports research and people by providing facilities, instruments and funding to support their ingenuity and sustain the U.S. as a global leader in research and innovation. With a fiscal year 2020 budget of $8.3 billion, NSF funds reach all 50 states through grants to nearly 2,000 colleges, universities and institutions. Each year, NSF receives more than 40,000 competitive proposals.