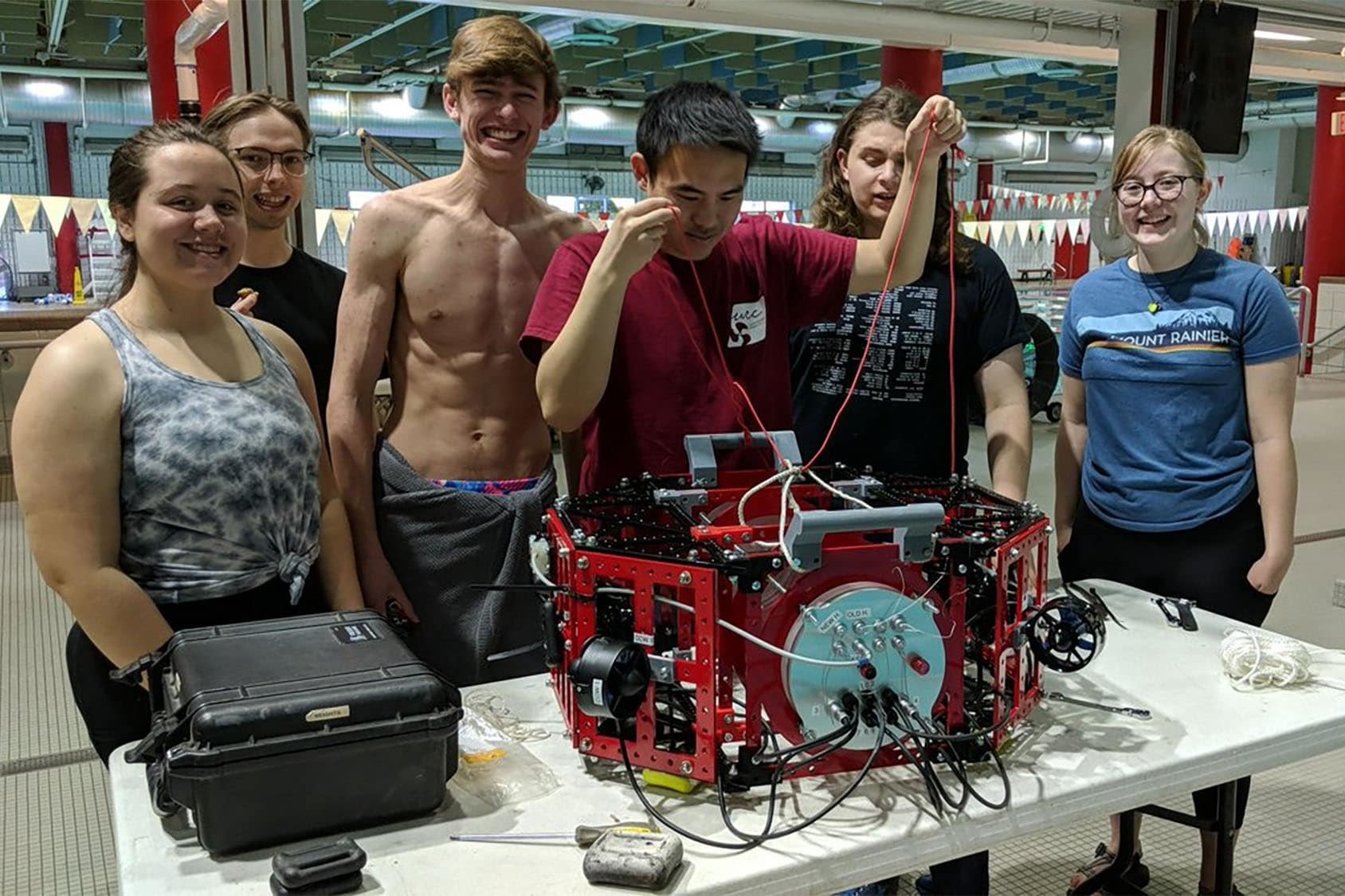 The Underwater Robotics Club at NC State allows engineering students to test their knowledge and explore new skills beyond the classroom.

The new age of technology is taking us to places that humans have never been before. In particular, one place being explored at NC State is underwater. The AquaPack Robotics Club at NC State (formerly known as the Underwater Robotics Club, the club changed their name in 2022) is a student-led organization that engineers an autonomous underwater robot to complete various tasks—such as navigating obstacle courses and firing torpedoes.

The club competes in the worldwide RoboSub competition held in San Diego each year, sponsored by industry partners such as Blue Origin, Northrop Grumman, and NVIDIA, as well as the US Navy’s Office of Naval Research. International teams of students meet here to demonstrate their robot’s abilities that they have been developing over time.

Jeremy Hosang, a senior in electrical and computer engineering at NC State and the AquaPack Robotic Club’s president, describes the event as a “really great experience” to see what other teams have been working on, and draw inspiration from others’ innovation in order to apply it back to NC State’s Seawolf 8 robot.

Building and reinventing the Seawolf robot has been an ongoing task since the clubs’ founding year of 2004. URC has different generations of the robot which has allowed team members to step back from their work and recognize what’s working, and what needs to be improved in the next generation.

Currently, club members are working on their eighth rendition of their underwater robot, hence the name Seawolf 8.

As the robot continues to improve and grow, so do the club’s team members.

“A lot of what we do goes beyond the classroom, so it isn’t even stuff that’s taught in our normal coursework,” said Jake Keller, a senior mentor member of URC and graduate student in electrical and computer engineering. “There’s a lot of stuff that we don’t know how to do, so there’s an opportunity to push the envelope on your own and learn outside the classroom.”

The club operates with four sub-groups consisting of electrical, mechanical, software and acoustics teams. Members work within their sub-groups to contribute to the robot, and all of the sub-groups collaborate in order to create a holistic engineering experience.

The AquaPack Robotics Club is able to offer interdisciplinary work that applies what students learn in the classroom to real-world problems. And even further, students are learning to solve problems that are not being taught in the classroom.

Not only are students learning engineering skills, but Hosang explained that his time in the club has also helped him develop leadership, presentation, and teamwork skills.

Keller encourages interested students not to be afraid to reach out to current members of the club. He reminds students that, “we teach you what you need to know. It doesn’t matter what your major is, it doesn’t matter how much experience you have. A lot of us come in not thinking that we know enough to join the club. Frankly, the people who think they already have enough knowledge have a lot to learn as well. We’re here to help you, but also here to challenge you to do some work on your own and really grow.”

For more information about the AquaPack Robotics Club visit their website.