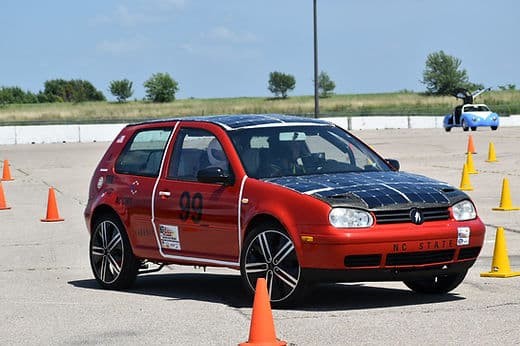 NC State’s solar vehicle team, SolarPack, competed in the Formula Sun Grand Prix (FSGP) earlier this month and drove the fastest lap in the history of the competition, finishing in three minutes and one second on a 2 1/2-mile track. The SolarPack car completed a total of 75 laps.

SolarPack’s car is a converted 2001 Volkswagen Golf GTI that weighs over 2,800 pounds, by far the heaviest car at the FSGP. Harrison Strag, SolarPack’s high voltage team lead and a fourth-year studying electrical engineering, said weight was a severe roadblock to the car’s performance.

“The heavier a car is, the more energy it needs to move,” Strag said. “When you’re in a race that’s based more on distance than it is on speed, to go the farthest distance you need to have the lightest car. That’s why you see the lightest cars are winning these solar races.”

SolarPack purchased the original Volkswagen Golf body during the height of the COVID-19 pandemic for just $1,000. Ben Nichols, SolarPack’s technical director and a graduate student in electrical and computer engineering, said the team wanted to show that solar energy could be practically applied to existing car models, but they also needed to conserve money during that difficult time.

“The few sponsors we had that would have been able to [fund SolarPack] had to focus on their companies and make sure that they would survive through the pandemic,” Nichols said. “Buying the Golf cut about $30,000 dollars in car body fabrication costs.”

COVID-19 presented challenges to SolarPack’s efforts in other ways as well. During the first six months of working on the car, the club had to operate out of a team member’s driveway because they were unable to use University space. In order to be safe, only five people were allowed to work on the car at a time.

Nichols said the team faced additional unexpected obstacles before the race. The truck pulling the car’s trailer broke down on the way to competition in Topeka, Kansas, and had to be replaced. A flight was delayed and then canceled. SolarPack came to the race with their battery pack untested.

“We worked tirelessly getting the battery pack assembled and into the car but we never had the time to test the pack before we were off to the race,” Nichols said. “This was a huge risk for us, but we had no other choice than to trust our capabilities and head to the competition.”

Later, the team discovered two of the cells in the 1,352-cell battery pack had come loose and had to stay up for an entire night so they could fix this issue. Strag said he believes this was the most difficult ordeal SolarPack had to overcome at the event.

“It involved redoing a lot of what we’d already done: reassembling the battery enclosure, reassembling the battery pack, bringing individual cell modules up to charge — which takes time, and is a little more difficult to do,” Strag said. “We had to then disconnect all the cables, all the wires, then reconnect all the cables, all the wires. We had to take a whole busbar off and remake it almost entirely.”

The car’s electrical drama climaxed with a 400-amp battery shortage that put a wrench out of commission. However, the battery pack was shielded from harm by a fuse and the car was able to get on the track a few hours after the shortage occurred 一 45 minutes before racing ended that day.

Theodore Holshouser, a high voltage team member and a fourth-year studying computer engineering, said seeing the car get on the road as onlookers cheered was a euphoric experience.

“It was actually more moving for me to hear the reception from the people [at the track],” Holshouser said. “Hearing that ovation … I almost broke into tears.”