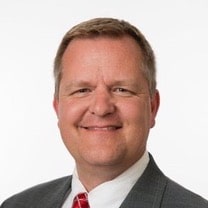 Dr. Andrew Mueller received his B.S. in Electrical Engineering from NC State in 1992. While at NC State, Dr. Mueller worked as a cooperative engineering student at the NASA Johnson Space Center where he completed assignments as a flight controller in Mission Control and a systems engineer in the Astronaut Office. He also founded a start-up program in which undergraduate students designed and built a space shuttle payload for NASA. The Orbital Debris Radar Calibration Spheres Project flew successfully on the Orbiter Discovery in February of 1993.

Dr. Mueller earned his Doctor of Medicine from the University of North Carolina in 1996. He completed his training in Family Medicine at Malcolm-Grow Medical Center, Andrews Air Force Base, where he was selected as Chief Resident in 1998. After completing his residency, he was assigned to Charleston Air Force Base where he served as a flight surgeon. His duties included serving as a crew member aboard USAF C-17 Globemaster III and deploying overseas in support of Operation Enduring Freedom.

Dr. Mueller joined Novant Health as a family physician in 2006. He has accepted increasing responsibilities in various physician leadership roles. He currently serves as a Senior Vice President of Novant Health and the President of the Greater Charlotte Market for Novant Health. In this capacity, he is responsible for the profit and loss statement, strategy, growth, implementation of value-based care arrangements, patient experience, market service lines, community relations and capital and operating budgets for the entire market. He also oversees the Community Medicine, Pediatrics, Behavioral Health and Orthopedics service lines across the entire health system. He continues to practice medicine as a family physician.

Dr. Mueller is a Wolfpack enthusiast. His grandfather, father, and wife attended NC State, and his oldest daughter is a current Park Scholar who will graduate in 2019.