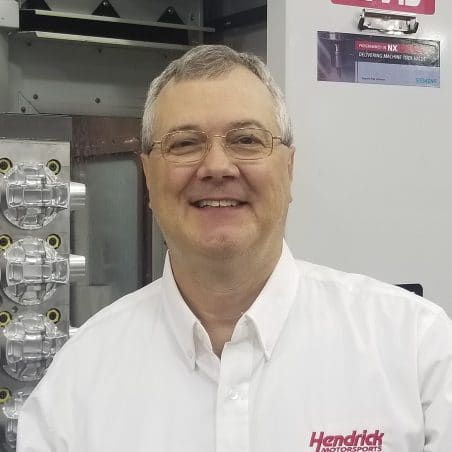 At 18 years old, Jim began working with legendary engine builder Randy Dorton at Competition Engines. Jim received his B.S. in electrical engineering at NC State in 1985. He worked for the Hendrick Motorsports engine program as their first degreed engineer before finishing his M.S. in electrical engineering at NC State in 1988 with a concentration in Power Systems and Circuit Design and a minor in Mathematics.

During Jim’s 30-year tenure, Hendrick Motorsports has been awarded a NASCAR-leading 20 engine builder of the year awards. He has contributed to all 12 of the team’s Cup-level championships and its 15 NASCAR national series owner titles, which are both all-time records.

In 2003, Jim was presented with the Papa Joe Hendrick Award of Excellence, which is Hendrick Motorsports’ highest honor bestowed for significant contributions to the organization. Jim is on the advisory board of the Boys & Girls Club of Cabarrus County and serves at First Baptist Church in Concord, North Carolina.