A Behavior-based Approach to Secure and Resilient Industrial Control Systems

Industrial control systems (ICS) control and manage a significant portion of critical infrastructure. As cyberattacks increasingly target
critical infrastructure, ICS security and resilience are required to avoid catastrophic events that may lead even to loss of life.
Importantly, ICS differ from traditional IT systems in several ways, from interacting with physical processes to requirements for
continuous operation and real-time processing.
In this talk, we present a behavior-based approach to the design of secure and resilient industrial control systems. Starting with a
programmable specification of a control process, we develop executable code with specified security properties. A run-time
middleware, ARMET, monitors the execution of the program, identifying behavioral deviations due to intrusions or process failures
and leading to diagnosis and system recovery. Importantly, our approach includes a novel method for vulnerability analysis of
processes. 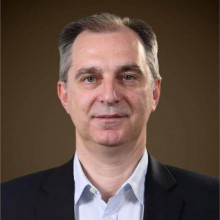 Dimitrios Serpanos is Professor of ECE, University of Patras and Director of the Industrial Systems Institute/ATHENA-RC, Patras,
Greece. He holds a PhD in Computer Science from Princeton University (1990) and an Engineering Diploma in Computer Engineering
and Informatics, University of Patras (1985). His research focuses on embedded and industrial control systems architecture and
security.
He has served as President of the University of Western Greece (2010-2013) and as Director of the Industrial Systems Institute
(2008-2013). He has been Research Staff Member at IBM (T.J. Watson, 1990-1996), and faculty at the Universities of Crete
(1996-2000) and Patras (2000-). He was Principal Scientist at the Qatar Computing Research Institute (2013-2016).
Professor Serpanos is currently the Treasurer and a member of the Board of Governors of IEEE Computer Society. He is a Golden
Core member of the IEEE Computer Society (2017).