Optical coherence tomography has opened a new window into biomedical imaging by providing imaging several mean free scattering path lengths into tissue, and has been dubbed in vivo optical histology.

“The ability to contrast coherence images using targeted nanoprobes presents particular challenges over conventional microscopies. I will explore the development of two classes of nanoprobes and their associated imaging algorithms for coherence imaging contrast: plasmon-resonant gold nanorods and magnetic nanoparticles. I will also present preliminary studies showing in situ elastography by using the magnetic nanoparticles as internal force transducers.” 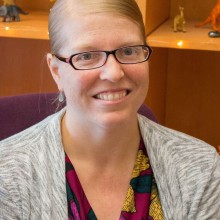 Dr. Amy Oldenburg received her B.S. in Applied Physics from the California Institute of Technology in 1995. Working in atomic and molecular optical physics at the University of Illinois at Urbana-Champaign, she received her M.S. in 1997 and Ph.D. in 2001 in physics. She then joined the Biophotonics Lab at the Beckman Institute at the University of Illinois at Urbana-Champaign where she was senior research scientist until 2008, developing novel contrast methods for optical coherence tomography. She recently was appointed to assistant professor in the department of Physics and Astronomy at UNC Chapel Hill, where she is also a member of the Biomedical Research Imaging Center.