The intentional use of disease as a weapon has been recorded throughout human history. With modern technology, the potential impact of biological attacks is exceeded by only nuclear weapons. The dramatic advances in the biological sciences in the last few decades, and the expertise accumulated in large state-funded offensive biological weapons programs, have made the process simpler for those who are inclined to pursue such weapons. 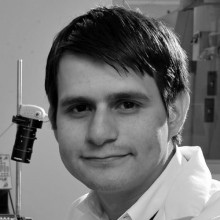 Dr. Carlos A. Aguilar is a member of the technical staff in the Chemical and Biological Defense Systems Group at MIT Lincoln Laboratory. Carlos received the B.S.E. degree in Mechanical Engineering from the University of Michigan at Ann Arbor in 2002, an M.S.E. in Mechanical Engineering in 2005 and Ph.D. degree in Biomedical Engineering in 2008 both from the University of Texas at Austin, respectively. Before joining MIT Lincoln Laboratory, Dr. Aguilar was a Visiting Scientist at IBM - T.J. Watson Research Center, where his work involved photoelectron spectroscopy of individual metal-oxide nanowires. He has won several awards including the George H. Mitchell Award for Excellence in Graduate Research from the University of Texas in 2007 and the HENAAC – Graduate Student Leadership Award in 2008. His current work at the laboratory includes research related to biometrics and non-invasive sensing modalities.