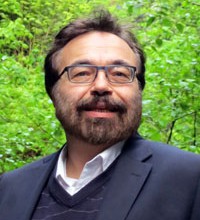 Professor of Electrical and Computer Engineering, University of Minnesota on April 18, 2008 at 12:00 PM in Engineering Building II, Room 1230

Professor G. B. Giannakis received his B.Sc. in 1981 from the
Ntl. Tech. Univ. of Athens, Greece and his M.Sc. and Ph.D. in
Electrical Engineering in 1983 and 1986 from the Univ. of
Southern California. Since 1999 he has been a professor with
the Department of Electrical and Computer Engineering at the
University of Minnesota, where he now holds an Endowed ADC
Chair in Wireless Telecommunications. His general interests
span the areas of communications, networking, signal
processing, estimation and detection theory -- subjects on which
he has published more than 250 journal papers, 450 conference
papers, two research monographs and two edited books. Current
research focuses on wireless networks, complex-field and space-time coding, ultra-wideband
and cognitive radios, cross-layer designs and wireless sensor networks. He is the (co-)
recipient of six best paper awards from the IEEE Signal Processing (SP) and
Communications Societies (1992, 1998, 2000, 2001, 2003, 2004) and also received the SP
Society's Technical Achievement Award in 2000 as well as the EURASIP Technical
Achievement Award in 2005. He is an IEEE Fellow since 1997 and has served the IEEE in
various editorial and organizational posts