The FACTS was pioneered and all the initial research and development was done by Westinghouse R&D center (in Pittsburgh) funded by EPRI (Electric Power Research Institute) in the 1990s and in the last decade. This pioneering group not only developed the FACTS technology – also installed eight large FACTS systems (7 in the US and one in Korea) ranging from 40MVA to 320MVA.

Voltage Source Converters (VSC) has been applied for FACTS (Flexible AC Transmission Systems) applications, with rating from around 40 MVA to 200 MVA. Penalty for overall system losses for FACTS devices result in strict constraint on converter losses, and therefore, restrict the use of PWM (pulse-width modulated) converters. As a solution, development of “Harmonic Neutralized” (HN) VSC topologies are presented. Attention is focused on challenges and limitations of HN-VSC – such as converter control and magnetics saturation, and control strategies during a system fault. Solutions to these limitations of HN-VSC are proposed. Control challenges of HN-VSC for a successful FACTS installation – two 100 MVA VSCs for NYPA (New York Power Authority) Convertible Static Compensator (CSC), is used to demonstrate both pitfalls and solutions. Operational constraints and field results of all FACTS devices – STATCOM, SSSC, UPFC, and IPFC are discussed. Some new concepts to achieve cost-effectiveness and increased reliability of VSC based FACTS devices are also presented. 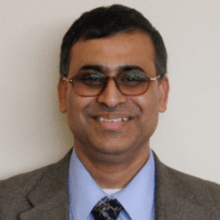 Subhashish Bhattacharya received his B.E. (Hons), M.E. and PhD degrees in Electrical Engineering from University of Roorkee (IIT-Roorkee), India in 1986, Indian Institute of Science (IISc), Bangalore, India in 1988, and University of Wisconsin-Madison in 2003, respectively. He worked in the FACTS (Flexible AC Transmission Systems) and Custom Power group at Westinghouse Science & Technology Center in Pittsburgh which later became part of Siemens Power Transmission & Distribution - FACTS and Power Quality Division, from 1998 to 2005. Since August 2005, he joined the Department of Electrical and Computer Engineering at North Carolina State University (NCSU) as an Assistant Professor, where he is also a faculty member of the FREEDM systems center NSF ERC (www.freedm.ncsu.edu) and Advanced Transportation Energy Center (ATEC - www.atec.ncsu.edu) at NCSU. His research interests are FACTS, Utility applications of power electronics such as custom power and power quality issues; active filters, high power converters, converter control techniques, integration of energy storage to the grid, and application of new power semiconductor devices such as SiC for converter topologies and solid-state transformer. He holds four U.S. patents and has published over 100 technical papers. He also worked with York International Corp. from 1994 - 1996 for commercialization of his active filter PhD research work for air-conditioner chiller application. He has been involved in several FACTS projects including the two 100 MVA Convertible Static Compensator (CSC) at New York Power Authority (NYPA).