The first part of this talk will highlight the need for frequency support in modern power grids facing low inertia challenge due to replacement of conventional generation by inverter-interfaced renewables. Today’s grids are experiencing deeper frequency nadir and higher rate-of-change-of-frequency following a generation loss, which can lead to underfrequency load shedding issues among others.  Frequency dynamics in weak grids with wind farms interfacing point-to-point HVDC links will be analyzed in this context. In the second part, the talk will focus on Multiterminal DC (MTDC) grids that are planned in and around Europe to integrate offshore wind and onshore solar energy. The speaker will focus on the frequency support issue among AC grids interconnected by the DC network and delve deeper into the control challenges of such grids in providing exchange of frequency support in a controlled manner. Finally, the possibility of frequency support from grid-connected microgrids will be discussed. 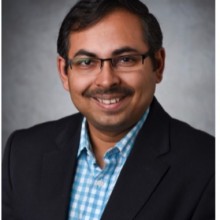 Nilanjan Ray Chaudhuri received his Ph.D. degree from Imperial College London, London, UK in 2011 in Power Systems. From 2005-2007, he worked in General Electric (GE) John F. Welch Technology Center. He came back to GE and worked in GE Global Research Center, NY, USA as a Lead Engineer during 2011-2014. Presently, he is an Associate Professor with the School of Electrical Engineering and Computer Science at Penn State, University Park, PA. Dr. Ray Chaudhuri is the lead author of the book Multi-terminal Direct Current Grids: Modeling, Analysis, and Control (Wiley/IEEE Press, 2014), and served as an Associate Editor of the IEEE TRANSACTIONS ON POWER DELIVERY (2013 – 2019) and IEEE PES LETTERS (2016 - present). Dr. Ray Chaudhuri was the recipient of the National Science Foundation Early Faculty CAREER Award in 2016 and Joel and Ruth Spira Excellence in Teaching Award in 2019.