Detection systems are used in a wide varieties of applications, from medical to military, and for personal to commercial use. Combining multiple detection systems for improved performance is the goal of fusion of detection systems. The U.S. Air Force (USAF) has many legacy detection systems and we understand how they work, and typically, how well they perform. The USAF is always seeking ways to improve the performance of these systems for operational use. Improvements might be in the form of: (1) upgrading the sensor; (2) changing an algorithm in a component; (3) inserting another sensor that has a different modality; or (4) inserting a new component to work alongside the existing component(s). Making these kinds of changes to an existing system not knowing how beneficial the end result will be can cost a lot of time and money. This time and money is due to the steps we have to take: (1) Design a combination method or rule. There may be many possible methods but we usually make a “best” guess. (2) Build the new combined system according to this method. (3) Test this new system. One may have to perform multiple tests in order to get enough data. (4) Perform verifications and validations of the combined system. (5) Determine the performance of the new combined system. This talk will discuss the mathematical theory of the fusion of detection systems. The architecture of combining these systems is the main interest of this work. We assume the detection systems are known and we know their receiver operating characteristic (ROC) curves. We present a method for determining the performance of fused detection systems based upon combining their ROC curves, thus, we eliminate several of these steps mentioned above. 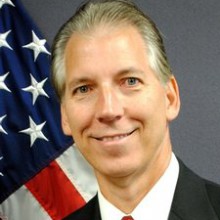 Mark E. Oxley is a Professor of Mathematics in the Department of Mathematics
and Statistics, Graduate School of Engineering and Management, Air Force Institute of Technology located on Wright-Patterson Air Force Base, Ohio. Dr. Oxley earned the B.S. degree in mathematics from Cumberland College in 1978, the M.S. degree in applied mathematics from Purdue University in 1980, and the Ph.D. degree in mathematics from North Carolina State University in 1987 (advisor Robert H. Martin). He has co-authored over 90 journal articles in: applied mathematics, engineering, nonlinear partial differential equations, groundwater modeling, pattern recognition, signal processing, image processing, information fusion, classifier fusion, and receiver operating characteristic analysis. He has been funded by DARPA, AFRL, NASIC and AFOSR.