Future electrical power sources will be more decentralized to capture renewable power or to increase exergy by combining heat, cooling and power generation. At the load side, it is anticipated that heat demand for new build city quarters will go down while cooling power will go up. Clearly, local power supply and demand will not be balanced to each other. Under these conditions it makes sense to rethink the way electrical distribution grids in cities and low voltage grids in buildings are designed. Dynamic control of power flow and storage of energy is needed to maintain proper power quality and achieve high efficiency. Flexible grid concepts for DC distribution systems, using intelligent electronic substations and DC protective gear are presented. The advantages of low-voltage DC in smart building and homes are considered. The status of research at RWTH Aachen University, the technology development and the cooperation with industry will be presented and discussed. 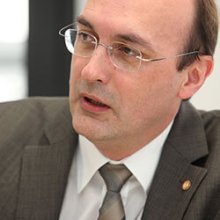 Rik W. De Doncker (M'87-SM'99-F'01) received his Ph.D. degree (summa cum laude) in electrical engineering from the Katholieke Universiteit Leuven, Leuven, Belgium in 1986. In 1987, he was appointed a Visiting Associate Professor at the University of Wisconsin, Madison, where he lectured and conducted research on high-performance induction motor drives. In 1988, he was a General Electric Company Fellow in the microelectronic center, IMEC, Leuven, Belgium. In December 1988, he joined the General Electric Company Corporate Research and Development Center, Schenectady, NY, where he led research on drives and high-power soft-switching converters, ranging from 100 kW to 4 MW, for aerospace, industrial, and traction applications. In November 1994, he joined Silicon Power Corporation (formerly GE-SPCO) as Vice President, Technology. He worked on high-power converter systems and MTO devices and was responsible for the development and production of a 15-kV medium-voltage thyristor based transfer switch. Since October 1996, he has been a professor at Aachen University of Technology, Aachen, Germany, where he leads the Institute for Power Electronics and Electrical Drives. In Oct. 2006 he was also appointed director of the E.ON Energy Research Center at RWTH Aachen University, where he leads the Institute for Power Generation and Storage Systems.

He has published over 250 technical papers and is holder of 25 patents, with several pending. Currently, Dr. De Doncker is member of the Board of the German engineering Society VDE-ETG. He is an IEEE Fellow and is currently past president of the IEEE Power Electronics Society (PELS). He is member of the EPE Executive Council. He was founding Chairman of the German IEEE IAS-PELS Joint Chapter. Dr. De Doncker is recipient of the IAS Outstanding Achievements Award and the IEEE Power Engineering Custom Power Award (2008). In 2009, he led a VDE/ETG Task Force on Electric Vehicles. In 2010, he became member of the German National Platform for Electromobility.

ABB and the Electrical and Computer Engineering Department are proud to host the ABB Distinguished Lecture Series in Power Engineering. Each semester, a nationally prominent expert will lecture on a topic related to recent developments in power technology and the smart grid. Distinguished speakers drawn from ABB, academia and the power industry will address the most timely and challenging topics of the power engineering and smart grid industries. Everyone is invited to attend, from undergraduates on up to faculty and friends of the department.