For several real-world problems, signal processing approaches are most successful when they combine the insight offered by the physics underlying the problem with the mathematical framework and tools inherent in digital signal processing. Imaging systems are a particularly fertile ground for problems in this class because they deal specifically with the capture of physical scenes and with the reproduction of images on physical devices. In this presentation, we highlight specific examples of problems in physical imaging for which the combination of physical insight, mathematical tools, and engineering ingenuity leads to particularly elegant and effective solutions.

We illustrate the above ideas in some depth using a specific case study on show-through – the phenomenon observed in duplex printed documents, wherein the printing on the back side is “visible” when viewing or scanning a chosen “front-side”. In document scanning, this is considered an undesirable artifact, which we would like to eliminate without causing loss of other information. We show how this goal can be accomplished by using a novel image processing algorithm which embodies the above ideas by combining three ingredients: a physical model for the phenomenon, suitable mathematical simplification, and the engineering innovation of adaptive filtering, each of which is necessary for success. Next, we illustrate that show-through itself may be viewed as an opportunity instead of a problem. With suitable image processing, the phenomenon can be advantageously exploited to electronically create a watermark similar to conventional watermarks embedded in paper. The watermark, embedded in the form of correlations in the halftones on the two sides, is imperceptible when either side of the paper is viewed but becomes apparent when the paper is held up against the light, allowing for very simple manual detection. Once again the benefit is achieved by the integrating the physical understanding with the image processing. Finally, we highlight numerous other examples of problems in color image capture where physically motivated signal processing is particularly powerful. 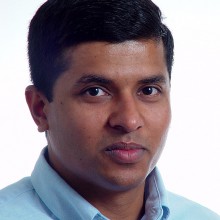 Associate Professor of Electrical and Computer Engineering, University of Rochester on August 6, 2006 at 1:00 PM in Engineering Building 2, Video Conference Room

Gaurav Sharma is with the University of Rochester, where he is a Professor in the Department of Electrical and Computer Engineering , Department of Computer Science , and Department of Biostatistics and Computational Biology. He is also a Distinguished Researcher in Center of Excellence in Data Science (CoE) at the Goergen Institute for Data Science . From 2008-2010, he served as the Director for the Center for Emerging and Innovative Sciences (CEIS), a New York state supported center for promoting joint university-industry research and technology development, which is housed at the University of Rochester. From 1996 through 2003, he was with Xerox Research and Technology in Webster, NY first as a member of research and technology staff and then as a Principal Scientist and Project Leader. He received the Ph.D. in Electrical and Computer Engineering from North Carolina State University, Raleigh, NC, and masters degrees in Applied Mathematics from NCSU and in Electrical Communication Engineering from the Indian Institute of Science, Bangalore, India. He received his bachelor of engineering degree in Electronics and Communication Engineering from Indian Institute of Technology, Roorkee (formerly, Univ. of Roorkee).