The onset of vision occurs when neural circuits in the visual cortex are immature, lacking the full complement of connections and the response selectivity that define functional maturity. Direction selective responses are particularly vulnerable to the effects of early visual deprivation, but how stimulus driven neural activity guides the emergence of cortical direction selectivity remains unclear. To explore this issue, we have developed a novel motion training paradigm that allows us to monitor the impact of experience on the development of direction selective responses in the visual cortex of visually naÔve ferrets. In this seminar I will discuss evidence from experiments using intrinsic signal and 2-photon imaging techniques which indicate that cortical circuits construct mature representations of motion direction using the spatiotemporal cues supplied by experience with moving visual stimuli. 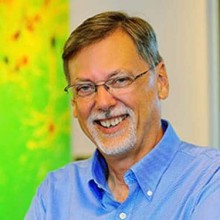 Professor in the Department of Neurobiology, Duke University on April 25, 2008 at 12:30 PM in Engineering Building II, Room 1230

Dr. Fitzpatrick is a Professor in the Department of Neurobiology at Duke University Medical Center. Dr. Fitzpatrickís scientific contributions have earned him international recognition as a leader in the study of the neural circuits that are responsible for visual perception. His current research utilizes state of the art optical imaging techniques to probe the functional architecture of circuits in primary visual cortex, and the critical role that visual experience plays in the proper maturation of these circuits. He has received a number of awards for his research accomplishments including an Alfred P. Sloan Research Award, The Cajal Club Cortical Discoverer Award, and The McKnight Neuroscience Investigator Award. He has served on numerous scientific advisory boards including the Searle Scholars Program, the DFG (German Research Foundation), the Riken Brain Science Institute, the Max-Planck-Institute for Neurobiology, and the National Institutes of Health. Dr. Fitzpatrick has also been recognized as an outstanding teacher, recipient of The Davison Council Excellence in Basic Science Teaching Award, and co-founder of the Cold Spring Harbor Course ìStructure, Function and Development of the Visual System.î He has served in an editorial capacity for a number of scientific journals and is currently a Senior Editor for the Journal of Neuroscience.