Over the past few years there has been a rapidly growing interest in analysis, design and optimization of various types of collective behaviors in networked dynamic systems. Collective phenomena (such as flocking, schooling, rendezvous, synchronization, and formation flight) have been studied in a diverse set of disciplines, ranging from computer graphics and statistical physics to distributed computation, and from robotics and control theory to social sciences and economics. A common underlying goal in such studies is to understand the emergence of some global phenomena from local rules and interactions.

In this talk, I will expand on such developments and present and analyze new models of consensus and agreement in random networks as well as new algorithms for information aggregation tailored to opinions and beliefs in social networks. Specifically, I will present a model of social learning in which an agent acts as rational and Bayesian with respect to her own observations, but exhibits a bias towards the average belief of its neighbors to reflect the network effect”. When the underlying social network is strongly connected all agents reach consensus in their beliefs. Moreover, I will show that when each agent’s observed signal is independent from others agents will learn like a Bayesian who has access to global information hence information is correctly aggregated. 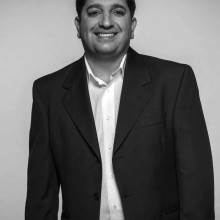 Associate Professor of Innovation, University of Pennsylvania on January 14, 2011 at 1:00 PM in Engineering Building III, Room 2213

Ali Jadbabaie received his BS degree (with High honors) in Electrical Engineering from Sharif University of Technology in 1995. After a brief period of working as a control engineer, he received a Master's degree in Electrical and Computer Engineering from the University of New Mexico, Albuquerque in 1997and a Ph.D. degree in Control and Dynamical Systems from California Institute of Technology in 2001. From July 2001-July 2002 he was a postdoctoral associate at the department of Electrical Engineering at Yale University. Since July 2002 he has been with the department of Electrical and Systems Engineering and GRASP Laboratory at the University of Pennsylvania, Philadelphia, PA, where he is currently the Skirkanich Associate Professor of Innovation. He is a recipient of various awards, including NSF Career, ONR Young Investigator, Best student paper award of the American Control Conference 2007 (as advisor), the O Hugo Schuck Best Paper award of the American Automatic Control Council (joint with his student), and the George S. Axelby Outstanding Paper Award of the IEEE Control Systems Society. His research is broadly in the interface of control theory and network science, specifically, analysis, design and optimization of networked dynamical systems with applications to sensor networks, multi-robot formation control, social aggregation and other collective phenomena.