Memory Bandwidth Management for Enhanced Throughput and Security in GPUs

Graphics Processing Units (GPUs) are becoming an inevitable part of every computing system because of their ability to accelerate applications consisting of abundant data-level parallelism. They are not only used to accelerate applications in clouds (e.g., NVIDIA GRID) and high-performance computing (HPC) systems but are also employed in mobile and wearable devices. One of the most critical shared resource in GPUs is memory bandwidth. In this talk, I will discuss why the existing bandwidth management techniques can lead to sub-optimal GPU throughput and security. Specifically, I will discuss: a) how do we manage memory bandwidth across multiple applications in an efficient and fair manner, and b) why current bandwidth conserving techniques in GPUs, such as memory coalescing, lead to timing attacks and how can we prevent against them. The bulk of my talk is inspired by my research group’s two recent HPCA 2018 conference papers, which can be accessed here: http://adwaitjog.github.io/pubs.html 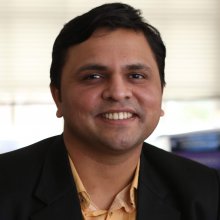 Adwait Jog is an Assistant Professor of Computer Science at the College of William and Mary (W&M). He earned his Ph.D. from the Pennsylvania State University, University Park in 2015. His research interests lie in the broad area of computer architecture. Specifically, he is interested in designing capable, energy-efficient, reliable, and secure general-purpose Graphics Processing Units (GPUs) and other accelerators. Results of his research have appeared in the top IEEE/ACM computer architecture conferences: ISCA, MICRO, HPCA, ASPLOS, and PACT. He is the recipient of the NSF CAREER Award (2018), NSF CRII award (2017), and Penn State Outstanding Graduate Research Assistant Award (2014). More details can be found on Adwait’s webpage: http://adwaitjog.github.io/