In this talk, we present a hierarchical layered approach that exploits all types of sensor and non- sensor signals and design suitable representation, processing and analysis algorithms in order to apply machine learning, including deep and shallow learning, leading to specific applications, which include healthcare and wellbeing, surveillance, and media and entertainment to mention a few. We focus on novel neural network topologies to enable machine learning solutions in several important applications. Among these, three projects will be summarized. VIRPA-D is a large consortium project on emphatic buildings. Our group concentrates on analyzing visual information along with other sensor information in order to better serve different new services in emphatic buildings. In aColor project, we are dealing with an autonomous boat, drones and an underwater vehicle (a miniature submarine). We use data from several cameras to avoid collision and help in navigation. Possible applications include search & rescue operations. Finally, in DETECT project we are developing methods for autonomic identification of Benthic macroinvertebrates collected from Finnish fresh waters. The task of monitoring these macroinvertebrates is regulated by a EU law, because the state of the ecosystems quickly responds to environmental changes and can help in targeting appropriate actions. 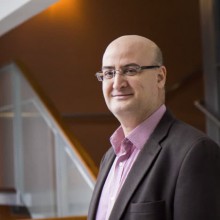 Director, NSF IUCRC Center for Visual and Decision Informatics, Tampere University of Technology on November 16, 2018 at 11:45 AM in EB2 1230

Dr. MONCEF GABBOUJ received his BS degree in electrical engineering in 1985 from Oklahoma State University, Stillwater, and his MS and PhD degrees in electrical engineering from Purdue University, West Lafayette, Indiana, in 1986 and 1989, respectively. Dr. Gabbouj is a Professor of Signal Processing at the Department of Signal Processing, Tampere University of Technology, Tampere, Finland. He was Academy of Finland Professor during 2011-2015. He was a visiting professor at the Departments of Electronic and Computer Engineering, Hong Kong University of Science and Technology, Hong Kong. Dr. Gabbouj was on sabbatical at the Viterbi School of Engineering, University of Southern California, Los Angeles, California, during spring 2012, and before that a visiting professor at the School of Electrical and Computer Engineering of Purdue University, West Lafayette, Indiana during fall 2011. He was also a visiting professor at the American University of Sharjah, UAE in 2007- 2008. He was Head of the Department during 2002-2007. Dr. Gabbouj was Senior Research Fellow of the Academy of Finland during 2007-2008 and 1997-1998. He is the co-founder and past CEO of SuviSoft Oy Ltd. From 1995 to 1998 he was a Professor with the Department of Information Technology of Pori School of Technology and Economics. From 1994 to 1995 he was an Associate Professor with the Laboratory of Signal Processing of Tampere University of Technology, Tampere, Finland. From 1990 to 1993 he was a senior research scientist with the Research Institute for Information Technology, Tampere, Finland. Dr. Gabbouj is currently the TUT-Site Director of the NSF IUCRC funded Center for Visual and Decision Informatics and member of the Science Council of Tampere University of Technology. His research interests include Big Data analytics, multimedia content-based analysis, indexing and retrieval, artificial intelligence, machine learning, pattern recognition, nonlinear signal and image processing and analysis, voice conversion, and video processing and coding. Dr. Gabbouj is an IEEE Fellow. He is a member of the IEEE Fourier Award Committee. He is member of the Academia Europaea and the Finnish Academy of Science and Letters. He served as Distinguished Lecturer for the IEEE Circuits and Systems Society in 2004-2005, and Past- Chairman of the IEEE-EURASIP NSIP (Nonlinear Signal and Image Processing) Board. He was chairman of the Algorithm Group of the EC COST 211quat. He served as associate editor of the IEEE Transactions on Image Processing, and was guest editor of Multimedia Tools and Applications, the European journal Applied Signal Processing. He is the past chairman of the IEEE Finland Section, the IEEE Circuits and Systems Society, Technical Committee on Digital Signal Processing, and the IEEE SP/CAS Finland Chapter. Dr. Gabbouj is the General Co-Chair of ICIP 2020. He was also Chairman of EUVIP 2014, CBMI 2005, WIAMIS 2001 and the TPC Chair of ISCCSP 2006 and 2004, CBMI 2003, EUSIPCO 2000, NORSIG 1996 and the DSP track chair of the 1996, 2012, 2013 and 2014 IEEE ISCAS. He is also member of EURASIP Advisory Board and past member of AdCom. He also served as Publication Chair and Publicity Chair of IEEE ICIP 2005 and IEEE ICASSP 2006, respectively. Dr. Gabbouj was Honorary Guest Professor of Jilin University, China (2005-2010). Dr. Gabbouj was the Director of the International University Programs in Information Technology (1991-2007) and vice member of the Council of the Department of Information Technology at Tampere University of Technology. He was also the Vice-Director of the Academy of Finland Center of Excellence SPAG, Secretary of the International Advisory Board of Tampere International Center of Signal Processing, TICSP, and member of the Board of the Digital Media Institute. He served as Tutoring Professor for Nokia Mobile Phones Leading Science Program (2005-2007 and 1998-2001). He is a member of IEEE SP and CAS societies. Dr. Gabbouj was the recipient of the 2017 Finnish Cultural Foundation for Art and Science Award, the 2015 TUT Foundation Grand Award, the 2012 Nokia Foundation Visiting Professor Award, the 2005 Nokia Foundation Recognition Award. He is the co-recipient of the Myril B. Reed Best Paper Award from the 32nd Midwest Symposium on Circuits and Systems and the NORSIG Best Paper Award from the 1994 Nordic Signal Processing Symposium. He was also the supervisor of the main author receiving the Best Student Paper Award from IEEE International Symposium on Multimedia, ISM 2011, the IBM Best Paper Award at ICPR 2014 and IPTA 2016. He published two books and over 700 journal and conference papers and supervised 46 doctoral and 58 Master theses. Dr. Gabbouj has been involved in several past and current EU Research and education projects and programs, including Horizon, ESPRIT, HCM, IST, COST, Tempus and Erasmus. He also served as Evaluator of IST proposals, and Auditor of a number of ACTS and IST projects on multimedia security, augmented and virtual reality, image and video signal processing.