Object Categorization and the Need for Many-to-Many Matching 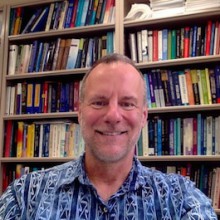 Professor of Computer Science, University of Toronto on January 25, 2008 at 8:00 AM in Engineering Building II, Room 1230

Sven Dickinson received the B.A.Sc. degree in systems design engineering from the University of Waterloo, in 1983, and the M.S. and Ph.D. degrees in computer science from the University of Maryland, in 1988 and 1991, respectively. He is currently Professor of Computer Science at the University of Toronto, where he served as Departmental Vice Chair, from 2003-2006, and as the Associate Professor, from 2000-2007. From 1995-2000, he was an Assistant Professor of Computer Science at Rutgers University, where he also held a joint appointment in the Rutgers Center for Cognitive Science (RuCCS) and membership in the Center for Discrete Mathematics and Theoretical Computer Science (DIMACS). From 1994-1995, he was a Assistant Research Professor in the Rutgers Center for Cognitive Science, and from 1991-1994, a Research Associate at the Artificial Intelligence Laboratory, University of Toronto. He has held affiliations with the MIT Media Laboratory (Visiting Scientist, 1992-1994), the University of Toronto (Visiting Assistant professor, 1994-1997), and the Computer Vision Laboratory of the Center for Automation Research at the University of Maryland (Assistant Research Scientist, 1993-1994 , Visiting Assistant Professor, 1994-1997). Prior to his academic career, he worked in the computer vision industry, designing image processing systems for Grinnell Systems Inc., San Jose, CA, 1983-1984, and optical character recognition systems for DEST, Inc., Milpitas, CA 1984-1985.