Segmentation visual content is a well studied problem in computer vision. It is also an ill-posed problem; loosely speaking, this means there are many plausible segmentations for a given piece of data. In this talk, I will reinterpret the segmentation problem as one of selection, which is to say selection among these many plausible segmentations. Interestingly, when doing so, selection can be seen as traversing scale-space, feature- space, time and as a mechanism for selecting training data in supervised problems. I will discuss methods for such selection in depth, focusing on selecting across scale- space and selection of temporal video clips for later supervision. Time permitting, I will present our latest results on automatic selection of best frames in video for guidance in video object segmentation. 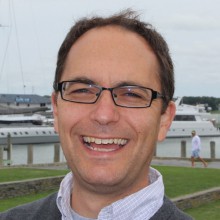 Dr. Corso is an associate professor of Electrical Engineering and Computer Science at the University of Michigan and Co-Founder / CEO of the computer vision startup Voxel51. He received his Ph.D. and MSE degrees at The Johns Hopkins University in 2005 and 2002, respectively, and the BS Degree with honors from Loyola College in Maryland in 2000, all in Computer Science. He spent two years as a post-doctoral fellow at the University of California, Los Angeles. From 2007-14 he was a member of the Computer Science and Engineering faculty at SUNY Buffalo. He is the recipient of a U Michigan EECS Outstanding Achievement Award 2018, Google Faculty Research Award 2015, the Army Research Office Young Investigator Award 2010, NSF CAREER award 2009, SUNY Buffalo Young Investigator Award 2011, a member of the 2009 DARPA Computer Science Study Group, and a recipient of the Link Foundation Fellowship in Advanced Simulation and Training 2003. Corso has authored more than 135 peer-reviewed papers and hundreds of thousands of lines of code on topics of his research interest including computer vision, robot perception, data science, and medical imaging. He is a member of the AAAI, ACM, MAA and a senior member of the IEEE.