These dual variational principles, which come directly from the conjugate duality of generalized by linearly constrained geometic programming, provide promising new theoretical approaches to numerically solving general systems of linear equations and/or linear inequalities – including general linear optimization problems. The resulting solution methodologies require only the numerical computation of a critical solution for an unconstrained objective function – carefully chosen for each individual problem from an infinite number of candidate functions, with the intent of possible exploiting any special system structure (such as sparsity). This infinite flexibility might make these new iterative solution methodologies competitive with the previously developed iterative solution methodologies for solving large-scale linear systems – including both the conjugate-gradient method for symmetric positive-definite systems of linear equations and the interior-point methodologies for linear optimization. In any even, these new dual variational principles also provide a framework for possible generalizing the Moore-Penrose generalized inverse to general finite linear systems. Finally, this paper provides an introduction to the basic ideas and fundamental theory of generalized geometric programming within the familiar context of elementary linear algebra, using only advanced calculus and elementary convexity theory. 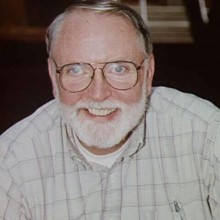 Born and raised in the "hills of western Pennsylvania", Peterson and his wife Miriam eventually became "tired of the flat mid-west topography and its extremely cold winters". In July of 1979, they joined Professor Salah E. Elmaghraby and his wife Amina in "the culturally improving and intellectually exciting Research Triangle, North Carolina (with its hilly terrain and moderate climate, only two and a half hours from both the Blue Ridge mountains and the Atlantic seashore)". He became Professor of Mathematics and Operations Research at NC State [Raleigh], and she became Director of the Wake County Nutrition Program for Women, Infants and Children, as well as both Adjunct Assistant Professor of Public Health Nutrition at the University of North Carolina [Chapel Hill] and weekly nutrition commentator for WTVD.

During his twenty-six years at NC State, with the help of research grants from both the National Science Foundation and CRAY Research, Peterson continued his previous research and began writing books on the mathematical foundations of both linear optimization and general nonlinear optimization/equilibration (including the "generalized geometric programming" he had developed in the 1970's). While publishing thirteen papers (three invited), and while giving twenty-two invited lectures (seventeen at national or international conferences, one at the University of North Carolina [Chapel Hill], three at Georgia Tech, and one at the Colorado School of Mines), he chaired or co-chaired at least five Ph.D. dissertations that eventually led to at least one full professorship at a major research university (in Taiwan), as well as a full professorship and deanship at an international business school (in Japan). He also served for six years on the editorial board of the Journal of Discrete Mathematics (published by the Society for Industrial and Applied Mathematics), and completed five short projects (four requested by the Operations Research Society of America and one by the College of William & Mary) while performing brief consulting services for two corporations and one non-profit institution (AT&T, Glen Raven Mills and the Research Triangle Institute). Moreover, he served the NC State University Graduate Program in Operations Research in various administrative capacities: as Acting Director from July of 1981 until August of 1983, Acting Associate Director from January of 1996 until August of 1996, Facilitator from September of 1996 until December of 1996, Acting Associate Director again from January of 2000 until August of 2000, and finally as Co- Director from September of 2000 until December of 2001