Topology in the 21st Century

In recent years, classical methods of algebraic topology have found increasing use in applications. The key ingredient for these applications is the persistent homology algorithm of Edelsbrunner, Letscher and Zomorodian (2000). I will discuss a few examples, from visual image statistics, sensor networks, and periodic dynamical systems. 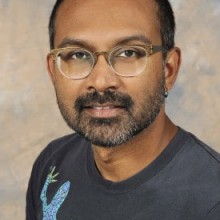 Vin de Silva studied mathematics at Cambridge and Oxford, completing a doctorate in symplectic geometry under the supervision of Simon Donaldson. Since 2000, he has worked in applied topology, spending five years working in Gunnar Carlsson's research group at Stanford. His work with Josh Tenenbaum and John Langford on the isomap algorithm is widely cited to this day, and his collaboration with Robert Ghrist on sensor network topology was honored by a SciAm50 award in 2007. Vin is currently an assistant professor of mathematics at Pomona College, California, and holds a Digiteo Chair at INRIA Saclay Ile-de-France.