Understanding the Privacy Dimension of Wearables through Machine Learning-enabled Inferences

To keep up with the ever-growing user expectations, developers keep adding new features and to augment the use cases of wearables, such as fitness trackers, augmented reality head mounted devices (AR HMDs), and smart watches, without considering their security and privacy impacts. In this talk, I will introduce our recent results on understanding the privacy dimension of wearables through inference attacks facilitated by machine learning.
To start, I will present an exploration of the attack surface introduced by fitness trackers where we propose an inference attack that breaches location privacy through the elevation profiles collected by fitness trackers. Our attack highlights that adversaries can infer the location from elevation profiles collected via fitness trackers. Then, I will review the attack surface introduced by smartwatches by developing an inference attack that exploits the smartwatch microphone to capture the acoustic emanations of physical keyboards and successfully infers what the user has been typing. Finally, I will present an exploration of the AR HMD’s through the design of inference attack that exploits the geometric projection of hand movements in air. The attack framework predicts the typed text on an in-air tapping keyboard, which is only visible to the user. 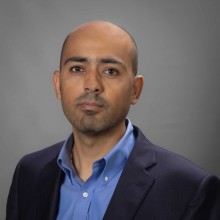 David Mohaisen (PhD’12, University of Minnesota) is a Full Professor of Computer Science at the University of Central Florida, where he has been since 2017. Previously, he was an Assistant Professor at SUNY Buffalo (2015-2017) and a Senior Scientist at Verisign Labs (2012-2015). His research interests are in the broad area of applied security and privacy, covering aspects of networked systems, software systems, IoT and AR/VR, machine learning, and blockchain systems. His research has been supported by a number of generous grants from NSF, NRF, AFRL, AFOSR, etc., and has been published in top conferences and journals alike, with multiple best paper awards. His work was featured in multiple outlets, including the New Scientist, MIT Technology Review, ACM Tech News, Science Daily, etc. Among other services, he is currently an Associate Editor of IEEE Transactions on Mobile Computing and IEEE Transactions on Parallel and Distributed Systems. He is a senior member of ACM (2018) and IEEE (2015), a Distinguished Speaker of the ACM and Distinguished Visitor of the IEEE Computer
Society. Visit https://www.cs.ucf.edu/~mohaisen/ for more information.