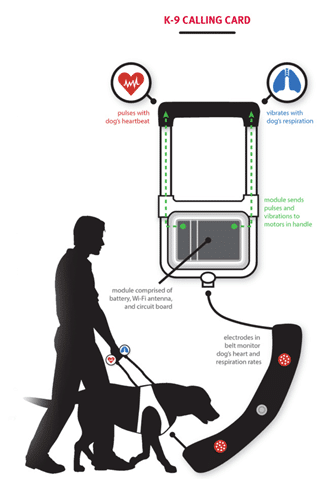 Computer science and electrical engineering researchers have made an effort to improve service dogs’ signals to companions.

Computer science and electrical engineering researchers have made an effort to improve service dogs’ signals to companions.

Researchers in NC State’s Electrical and Computer Engineering department are working on a prototype of a monitor that they hope will give more of a voice to guide dogs who help the visually impaired, granting them the payoff that the companions could then give better care to the dogs.

The monitor is connected to an owner’s handle and measures changes in a dog’s heart and respiration rates. There’s also a circuit board and Wi-Fi antenna included in the handle that sends information to a remote computer that processes the information. The owner is able to note diruptions in the dog’s heart rate and rate of breathing. That  Digram showing the elements of the devicelets the owner know that the dog’s health is being affected by something like heat exhaustion of that the dog is feeling stressed or anxious. That’s important because too much stress and anxiety can lead to a guide dog being retired early.

Guide dogs are trained not to react to stress, so the monitor will allow them to send a cue to their owners, says Alper Bozkurt, assistant professor of electrical and computer engineering. That helps overcome the communication gap caused by humans being used to hearing as the chief means by which they receive messages, says Dave Roberts, assistant professor computer science.

“Because the technology integrates fundamental principles of animal learning into a computational system, we are confident it can be applied to a wide range of canine behaviors,” says Bozkurt. “For example, it could be used to more quickly train service dogs. Ultimately, we think the technology will be used in conjunction with human-directed training.”

“This,” Bozkurt says, “was our service to service dogs.”