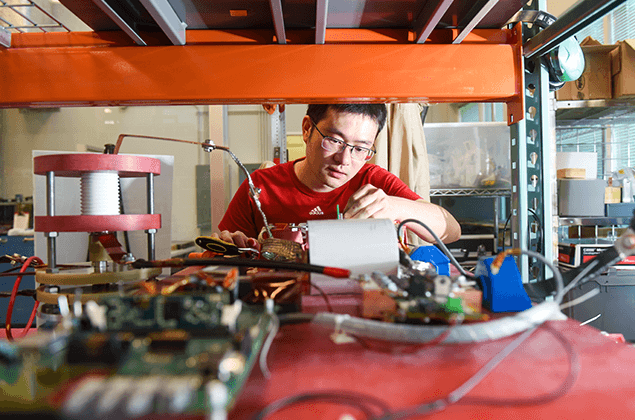 In year eight, the Future Renewable Electric Energy Delivery and Management (FREEDM) Systems Center led by NC State’s Department of Electrical & Computer Engineering moved closer to the vision that led to the center’s establishment. That vision is …

That vision is a more efficient grid that allows bidirectional electricity flow and renewable energy sources to integrate seamlessly with the existing power grid.

In early June, FREEDM completed its annual review with the National Science Foundation (NSF) and a site visit with NSF officials on the campus of partner institution Florida State University.

With two years to go on NSF’s 10-year funding commitment, the center is drawing closer to a field-deployed FREEDM system, one of its goals by the end of the initial NSF funding.

But it won’t stop there. The center is working toward long-term financial sustainability with a combination of private funding, research grants and dues from industry partners. A $1.5 million gift from the Duke Energy Foundation last year was a big start toward building a sustaining endowment for the center.

NSF established FREEDM in 2008 with a charge to develop technology that will seamlessly integrate distributed renewable energy sources and storage into the electric grid infrastructure.

As the way we harness energy changes from centralized fossil-fuel-based generation to renewable generation produced by decentralized solar or wind installations, so too must the grid that distributes that energy. In the FREEDM system, electricity will be generated close to the loads and managed with a distributed control system that is responsive to price signals, customer preferences, and situational considerations.

Work in the last year advanced the development of three key elements of the FREEDM system: a solid state transformer (SST) that allows bi-directional electricity flow and is more efficient than traditional transformers, a more efficient fault isolation device (FID), and the algorithms that will allow the devices to work together. While the SST and FID play a major role in the FREEDM system, they are also useful to improve a traditional power grid. FREEDM researchers hope to demonstrate new versions of both by the end of year nine.

The center is also conducting a cost/benefit analysis to evaluate the business case for utilities implementing the FREEDM system as well as for consumers who will be able to actively participate in the energy market. After successful field demonstrations planned over the next two years, it will be up to industry to take up the new technology and implement it.

“As the center transitions past NSF program funding, we will continue our core research activities in power electronics and power systems,” Husain said. “However, our faculty and industry partners will have state-of-the-art technologies for power grid modernization that are further along the path for deployment as we work together to realize the FREEDM vision.”