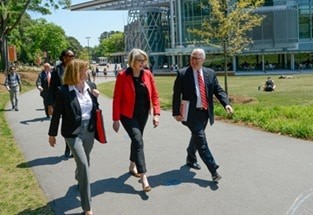 New UNC President Margaret Spellings took one last glance at the activity tracker on her wrist as she headed back to Holladay Hall-more than 10,000 steps on an illuminating tour of the largest campus in the university system.

New UNC President Margaret Spellings took one last glance at the activity tracker on her wrist as she headed back to Holladay Hall-more than 10,000 steps on an illuminating tour of the largest campus in the university system.

It was the 12th visit she’s made to the state system’s 17 institutions, and she came away with a strong sense of NC State’s place in higher education.

“At the student meeting, they said something that I thought was perfect,” Spellings said. “This is a very pragmatic place. It’s all about getting it done, taking world-class research and translating it to real-world applications.

A highlight among the cutting-edge research she saw on her day-long listening tour was the work being done in the National Science Foundation-certified Advanced Self-Powered Systems of Integrated Sensors and Technologies (ASSIST), where wearable technologies go way beyond counting steps.

That the multi-university center is led by a female Computer & Electrical Engineering professor, Veena Misra, and is attracting a larger number of female students into an emerging field made a big impact on the system’s new leader, as she absorbed multiple demonstrations at the center’s home in the Monteith Engineering Research Center.

Spellings also saw the innovative work being done at the Center for Additive Manufacturing and Logistics, where massive 3-D printers are churning out new processes for creating spare parts for large industrial manufacturing purposes and for household pets, among other things.

She saw the university’s past at Holladay Hall, its present at both the Hunt Library and the new Talley Student Union and how the past will become the future when the renovation at Reynolds Coliseum is completed in August.

At Hunt, she saw a demonstration of the famous bookBot, the student game lab, a digital history project that recreated a Martin Luther King speech in Durham and the naval training lab.

She met with business leaders with ties to NC State’s Centennial Campus during a listening lunch and had meetings with faculty, staff and students in separate listening sessions.

And she came away wowed by what is being done at the state’s first land-grant university.

“It is a tremendous place,” she said as her tour concluded. “It obviously provides an excellent education with incredible opportunities that are so relevant to the workplace, whether it is in engineering or political science or you name it.”

Walking step-by-step with Spellings was NC State Chancellor Randy Woodson, showing off his school’s most compelling features like a proud father. And Spellings gave him credit for much of what she saw.

“All of this starts with a tremendous leader,” she said. “Show me a good leader and I’ll show you a good enterprise.”

Spellings said among the things she will take up with the General Assembly when it begins its short session in Raleigh next week was a pay increase for faculty and staff.

“The No. 1 priority of mine and the Board of Governors is a staff and faculty pay raise,” she said. “It’s been a long time and we are in a super-competitive environment. You can’t run great institutions without great people.

“We need some assistance there.”

She also addressed media questions about North Carolina’s controversial HB2, a law that she says has “cast a chill on campus” and the recent federal appeals court ruling in Virginia that puts federal funding for schools with discriminatory policies in jeopardy.

Spellings enjoyed her meeting with student leaders and heard their thoughts and concerns, particularly about their passion for social change, their thoughts on diversity and inclusion and the overall learning atmosphere for a student body of more than 34,000.

“They are such a good representation of what is going on here,” she said. “They are smart and passionate. They are warm and loving towards each other.

“The feel of the place is palpable.”

And that, she said, was her favorite part of the day, which also included a double scoop of Wolf Tracks Howling Cow ice cream.

“The students are always my favorite part of these tours,” she said. “They are why we are here. Without them, none of this would be possible or necessary.”