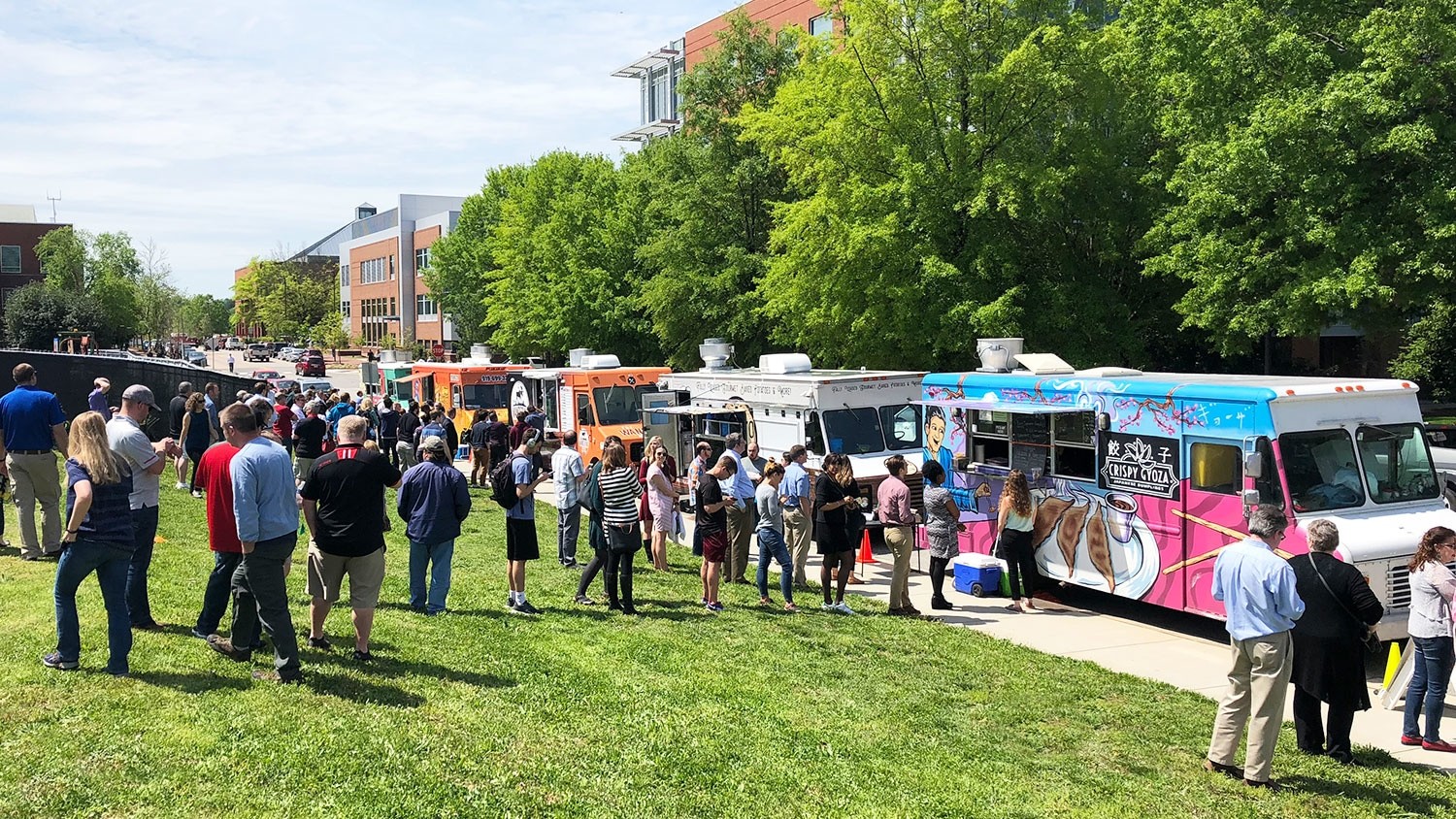 A slew of events and activities is putting NC State’s research park on the map in a new way — as a destination for fun.

Long known as a national hub for research, innovation and public-private partnership, Centennial Campus is home to three of NC State’s colleges and a number of research centers, institutes, laboratories and departments. Not to mention 76 industry, government and nonprofit partners.

But it’s more than a research park.

Centennial Campus is a bustling — and growing — community. A sprawling landscape with walking trails, a championship golf course, restaurants, condos and a hotel. A mini-city nestled around Lake Raleigh. And, just as important, a destination for fun.

Did you know you can catch a movie on the lawn, chow down at a food truck rodeo, enjoy a live concert and kayak by moonlight on Centennial Campus? (Not all at once, of course).

Thanks to the activation efforts of the university’s Real Estate and Development Office, these and other activities are springing up on Centennial Campus, drawing thousands of people and creating a vibrant after-hours atmosphere.

“People’s ideas need to collide, and in those collisions, you see innovation,” says Imran Aukhil, assistant director of finance and asset management. “Often those collisions are purposeful, like at conferences or symposia. Or they can be casual and serendipitous, like when people gather for a meal or outdoor concert. Our goal is to maximize those collisions so new ideas and relationships form that reflect Centennial Campus’ mission of innovation.”

It all started with a toilet, DesNoyer says with a laugh.

“The very first thing I did, that I felt proud of, was to put a port-a-potty down at Lake Raleigh, along with a couple of picnic tables and some grills,” he says. “I know that sounds really low brow, but it had a pretty immediate impact. The parking lot is full on the weekends and after five on weekdays. People are using the facilities. We made something out of nothing with minimal effort, and it turned out great.”

That small victory led to bigger ones.

Food trucks have been a daily lunchtime presence on Centennial Campus for years, thanks to a partnership with Campus Enterprises. DesNoyer worked with them recently to increase the number and variety of food trucks, and now Centennial Campus has a rotating 20-truck menu.

The next food truck rodeo, in November, will spotlight STEM education through a partnership with the NC Science Olympiad, which is based on Centennial Campus.

Through a partnership with Triangle Pop-Up, Centennial Campus will host an evening of food trucks, live music and shopping from local artists. The event takes place Sept. 26 on the greenspace in front of Hunt Library.

DesNoyer also joined forces with NC State LIVE to produce a spring music series by Lake Raleigh that featured live bands and food trucks. He says he expected 50 people to come to the first LIVE@Lake Raleigh concert. It drew 700. And that number continued to climb. The family-friendly events became so popular that next spring’s lineup is already in the works.

‘Nothing Less Than a Diamond’

Laura and McNair Bell, who both graduated from NC State in 1987, visit Centennial Campus regularly. They bike along part of the city’s greenway system that connects their neighborhood to places like the North Carolina Museum of Art, Centennial Campus, the State Farmers Market and downtown.

They frequent Centennial Campus for both business and pleasure, attending meetings and enjoying outdoor concerts.

“Centennial Campus is poised to be a major community asset,” McNair Bell says. “With the connectivity to other assets along the greenway and in the urban core of Raleigh, it is nothing less than a diamond.

“As directed by our university’s land-grant charter, community outreach is primary. What better way to engage the community than by immersing them in the campus? I think music, food and entertainment is a great draw and only the beginning of what we could do.”

Outdoor outfitter REI has started hosting adventure classes at Lake Raleigh for people who are interested in activities like kayaking, backpacking and SUPing (stand-up paddleboarding). The summer “kayak by moonlight” tours were especially popular.

A single weekly yoga class offered through a partnership with NC State Wellness and Recreation quickly exploded into three classes a week until the program recently lost its space. DesNoyer is working hard to find a home for the popular classes — and to expand the entire wellness program.

He worked with student entrepreneur Collin Blalock to launch the Centennial Campus Produce Box over the summer. Through a subscription system, Blalock brings produce to campus from his family’s Wilson, North Carolina, farm. Participants simply walked or made a short drive from their offices to pick up a box of fresh produce each week. It was a huge hit, DesNoyer says.

“It’s been really fun working with Collin, seeing him grow,” DesNoyer says. “He’s being a professional, he’s innovating his current business. He’s doing everything that we’re teaching him here at the university to do.”

Collaborations are the name of the game, DesNoyer says. His latest collaboration, with the Alamo Drafthouse, resulted in the launch of a Friday evening outdoor movie series this September. A 25th-anniversary screening of Dumb and Dumber caps the series, complete with complimentary bowl cuts by Arrow, costume contest and a “most annoying sound” contest.

“I love these events because they draw all sorts of people, especially families,” DesNoyer says. “It’s generational, right? I love that these kids can say, ‘When I was younger, my parents took me to see movies on the lawn at Centennial Campus.’”

“Jude works with many different university stakeholders on campus to provide programming — it’s not just the real estate office,” he says. “He has access to space and other important networks and resources on Centennial Campus through our office. We also provide funding so that all of our events are free to the community.

“Our goal is to create energy on Centennial Campus to facilitate innovation, and this activation effort will go a long way to create and maintain this energy.”