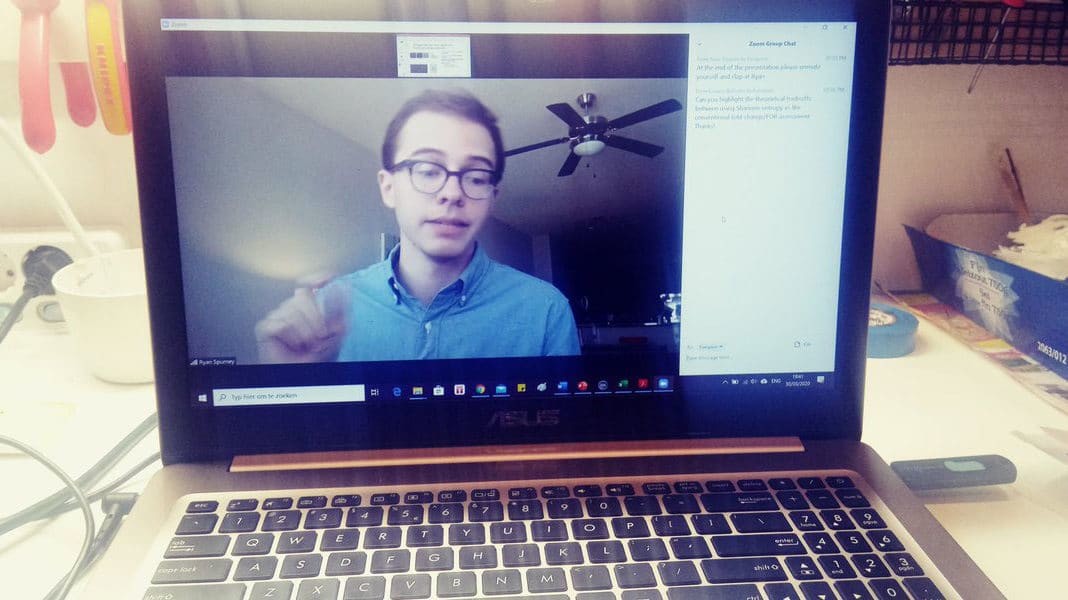 By The Graduate School

Like most thesis master’s students planning to graduate in May, Ryan Spurney had dutifully scheduled his thesis defense with his committee for March 30, about a month in advance. But over spring break earlier in the month, he learned that his in-person defense would have to be done remotely over Zoom, a virtual meetings platform, because of social distancing at NC State University.

Graduate School Dean Peter Harries announced to graduate faculty in early March that remote defenses would be allowed. “Although I strongly believe that defenses should take place in person, I also want to minimize the impact that the Coronavirus has on those students who have scheduled defenses,” Harries said in his message. “Therefore, the Graduate School will allow for remote defenses given the move to limit face-to-face meetings.”

“They say you have two working weeks to submit the request for the remote defense,” Spurney said. “Although I think they’re a little lenient, I was kind of scared because my defense was almost exactly two weeks away when that happened,” Spurney said.

Spurney is a master’s student in computer engineering, but he did his lab work and served as a research assistant in plant biology. His research involved developing and applying computational tools for analyzing genetic data.

“So (I was analyzing) gene expression data for plants, and seeing what kind of connections and what kind of biological processes we can understand by learning how the genes work,” Spurney said.

Adapting the defense wasn’t too challenging, he said, although he had never done a presentation via Zoom before. He was a little concerned about internet connectivity and how the presentation would turn out if the video moved a little slowly.

“When you’ve got a lot of people in one Zoom meeting room, especially with my basic internet package, there can be a little bit of choppiness sometimes,” Spurney said. “So I had to make sure that the information was presented in a way so that if I’m cutting out a little bit, someone can still understand what’s going on.”

Once he learned how to present his PowerPoint on Zoom, he felt comfortable with the process.

“I don’t think I’ve ever given a presentation like that remotely before, so just experiencing that in the first place was interesting. Making sure everybody who needed to be at the Zoom meeting was actually present on time was a little stressful too, just because you can’t actually see them in front of you,” Spurney said.

One awkward moment in the defense was when the committee had to “meet” to discuss Spurney’s presentation. They had to ask him to leave the meeting for a few minutes, then invited him back once they were finished. The good news: He passed the defense, and he learned shortly after that his thesis had been accepted.

A positive result of the remote defense was that Spurney was able to invite family and friends to participate, although he acknowledges that his department had previously used Zoom as a backup for defense sessions. Spurney’s committee members are Ross Sozzani and Robert Franks from plant and microbial biology, and Cranos Williams from electrical and computer engineering.

“I think generally my department is pretty good about having seminars both live and by Zoom as well anyway, just as kind of like a backup for most people. But it was nice; it forced me to make sure that everybody that I knew was going to be able to jump right in. I tested it with my parents to make sure they knew how it worked,” Spurney said.

After earning his degree, Spurney will head off Baltimore to work for a medical devices company there. Coronavirus may delay his start date, but he’s hoping to begin the new job by late summer.

Spurney’s advice for successfully completing a remote defense is this:
“I would say just to not worry too much about it. It’s already stressful to do the defense in the first place and then having to think about if the Zoom is going to work, all this different stuff on top of it. But I think, at least in my experience and with the way the university has been handling things, everyone is really understanding of the situation, and there’s no one I’m aware of who wouldn’t understand if something went wrong. So just don’t take it too hard, considering everything else going on.”

Original article from The Graduate School