Wolfspeed Ahead: An NC State Spinoff Powers the Future

The company that pioneered LED lighting now looks to improve the efficiency and performance of electric vehicles and other high-power applications. Meet the people building the world’s largest silicon carbide manufacturing facility in Chath … 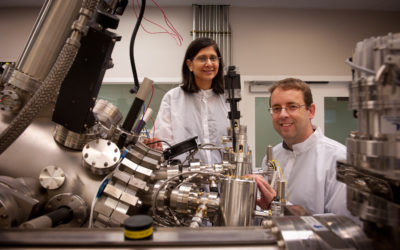 Dr. John Muth has assisted with the development of three-dimensional (3-D) printing technology and techniques to create free-standing structures made of liquid metal at room temperature.

“A game changer”: With CHIPS Act, NC is poised for a new manufacturing boom

The new law includes $13.2 billion for research and the training of people to work in the development, design and manufacturing of semiconductor wafers and the chips that are built on them. The R&D funding could be a boon to North Carolina’s research universities, especially N.C. State. John Muth, a professor of Electrical and Computer Engineering at North Carolina State University, said other states dominate in the design and production of silicon-based chips, but N.C. State is at the forefront of developing a new generation of silicon carbide semiconductors that can endure higher temperatures and higher voltages, qualities that will be increasingly needed in electric automobiles, data processing centers and clean energy production. “In general, we need to do more manufacturing, do it cleaner and employ people with better paying jobs and the CHIPS Act helps out with that,” he said.