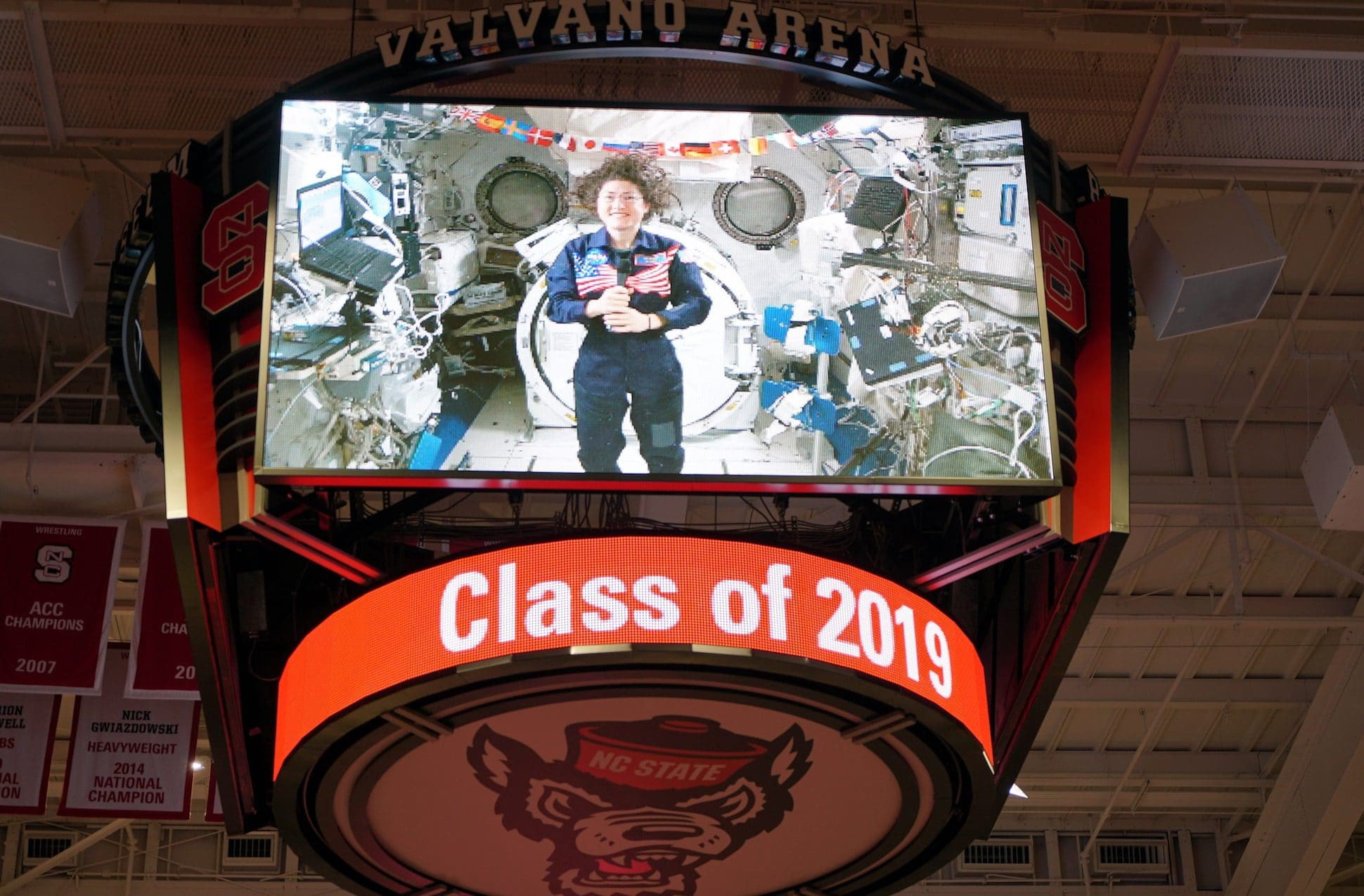 Astronaut Christina Koch speaks to the graduating class from space.

In a graduation ceremony that was partly out-of-this-world, the newest class of electrical and computer engineers celebrated their achievement in Reynolds Coliseum, joined by thousands in person and via video livestream.

On Friday, May 10, 2019, 377 Bachelor’s (B.S.), Master’s (M.S.), and Doctoral (Ph.D.) recipients celebrated their graduation during the Electrical and Computer Engineering Department’s Spring Graduation Ceremony. Held at the renovated William Neal Reynolds Coliseum at NC State, they were joined there by more than 2,500 friends, relatives, and guests, and watched on a livestream by over 5,000 guests unable to attend in person.

In a surprise appearance, Christina Koch, a NASA astronaut and ECE double-alumna (B.S. 2001; M.S. 2002) currently on the International Space Station welcomed the students and guests to the graduation ceremony via video, and urged the graduating students to follow their dreams.

“Don’t think there’s just one way to accomplish your dreams or a set of boxes you have to check through life,” Koch told the graduates before floating upwards in the microgravity environment aboard ISS. “Live your life according to your interests and passions.” The graduates were also honored to be addressed by Dr. Tony Montalvo, who received his bachelor’s degree in Physics from Loyola University in 1985 and a master’s degree from Columbia University in 1987. He worked at Advanced Micro Devices from 1987 to 1991 where he was involved in pioneering the first generation of flash memory and is a co-inventor of several fundamental patents for that technology. He arrived at NC State in 1991, performing research involving an analog implementation of a neural network machine learning system, before receiving his doctorate in 1995. After completing his doctorate, he joined Ericsson in Research Triangle Park where he developed RF integrated circuits for cellular handsets. While in grad school at NC State, he was named Best Teacher in 1991, and returned as an Adjunct Professor to teach an RF integrated circuits course from 1998 to 2004.

Montalvo joined Analog Devices in 2000 when he founded their Raleigh design center on Centennial Campus. At ADI he has led the development of a family of software-defined radio products with a wide range of applications ranging from cellular base stations to satellite communications. He was promoted to Fellow in 2012 and in 2017 became the Director of Technology of the more than $1 Billion Communications Business Unit. In 2018, Montalvo was inducted into the NC State ECE Alumni Hall of Fame.

Montalvo was joined in speaking by Hadeyah Oluwadasola Olanrewaju, known by many as Dasola. During her time at NC State, she had been a member of the ECE Student Ambassadors and served as the Public Relations Officer. She had also participated in undergraduate research, worked as a Resident Advisor, sang in NC State’s choirs, and interned at Konica Minolta Healthcare Americas. Following her graduation, she goes on to work at Alight Solutions in Charlotte, NC as a Workday Integration Specialist.

The Spring graduating class included 17 Ph.D. recipients, 258 Masters of Science, and 169 Bachelors of Science, joining the more than 16,000 alumni of the department.