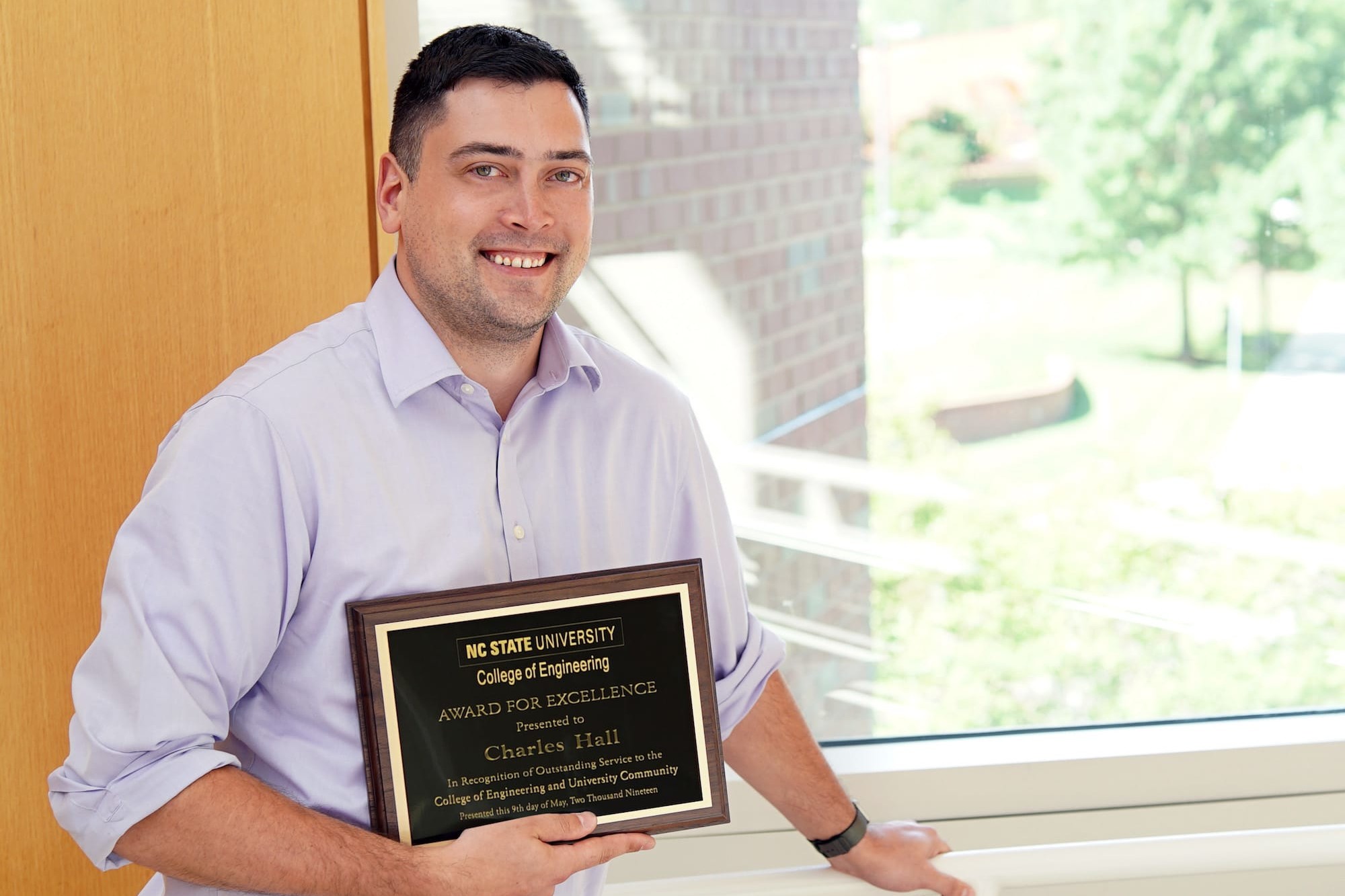 Charles Hall wins the Engineering Award of Excellence and was recognized along with three other outstanding ECE staff members at the annual Awards for Excellence ceremony.

Four outstanding electrical and computer engineering staff members were recognized by the College of Engineering at North Carolina State University at the annual Awards for Excellence ceremony held May 9 at the James B. Hunt Jr. Library on NC State’s Centennial Campus. Dr. Louis Martin-Vega, dean of the College of Engineering, honored the nominees, which included Jan Brock, Charles Hall, Hulgize Kassa, and Garret Nelson.

Charles Hall, was named one of the two SHRA winners for the College and presented with a plaque, cash award, and paid time off.

The Awards for Excellence program recognizes the accomplishments and achievements of permanent NC State employees at both the unit and University levels who do not hold faculty rank. Winners received eight hours of paid time off, a $250 check and a plaque. Winners are also made eligible for the university-wide Awards for Excellence—which will be awarded on June 11, 2019.

Jan Brock, a member of the department for five years, is the Human Resources and Executive Manager for the department and was nominated in the Customer Service category. Citing the outstanding job she has performed in undertaking two full-time positions for almost a year—as executive assistant to the department head and as interim human resources manager—, she has been performing both positions while simultaneously pioneering new methods and practices to improve efficiency across the department.

“[She] is a major contributor to the administration of the Department,” explained Greg Byrd, associate department head in ECE. “She provides strong leadership to the administrative staff, and serves as a welcoming and trusted contact for department faculty and the community outside of ECE.”

Hulgize Kassa, the laboratory manager for the FREEDM Systems Center lab in Keystone Science Center for the past nine years was also nominated in the Customer Service category. He is responsible for the lab operations and safety, and works closely with Ph.D. students in their research—some have even included him as co-author in their technical publications based on his contributions.

“This is something that is extraordinary for a lab manager,” said Subhashish Bhattacharya, a professor of electrical and computer engineering. “He does go above and beyond his duties and always with a smile.”

Garry Nelson, the Contracts and Grants Manager for the department over five years, also nominated in the Customer Service category, has been instrumental in providing critical support to help propel the department’s research into national prominence. With the largest amount of research expenditures for a single department at the university—6th in the country for ECE departments—he has been a driving force in ensuring faculty’s proposals and grants are managed to success.