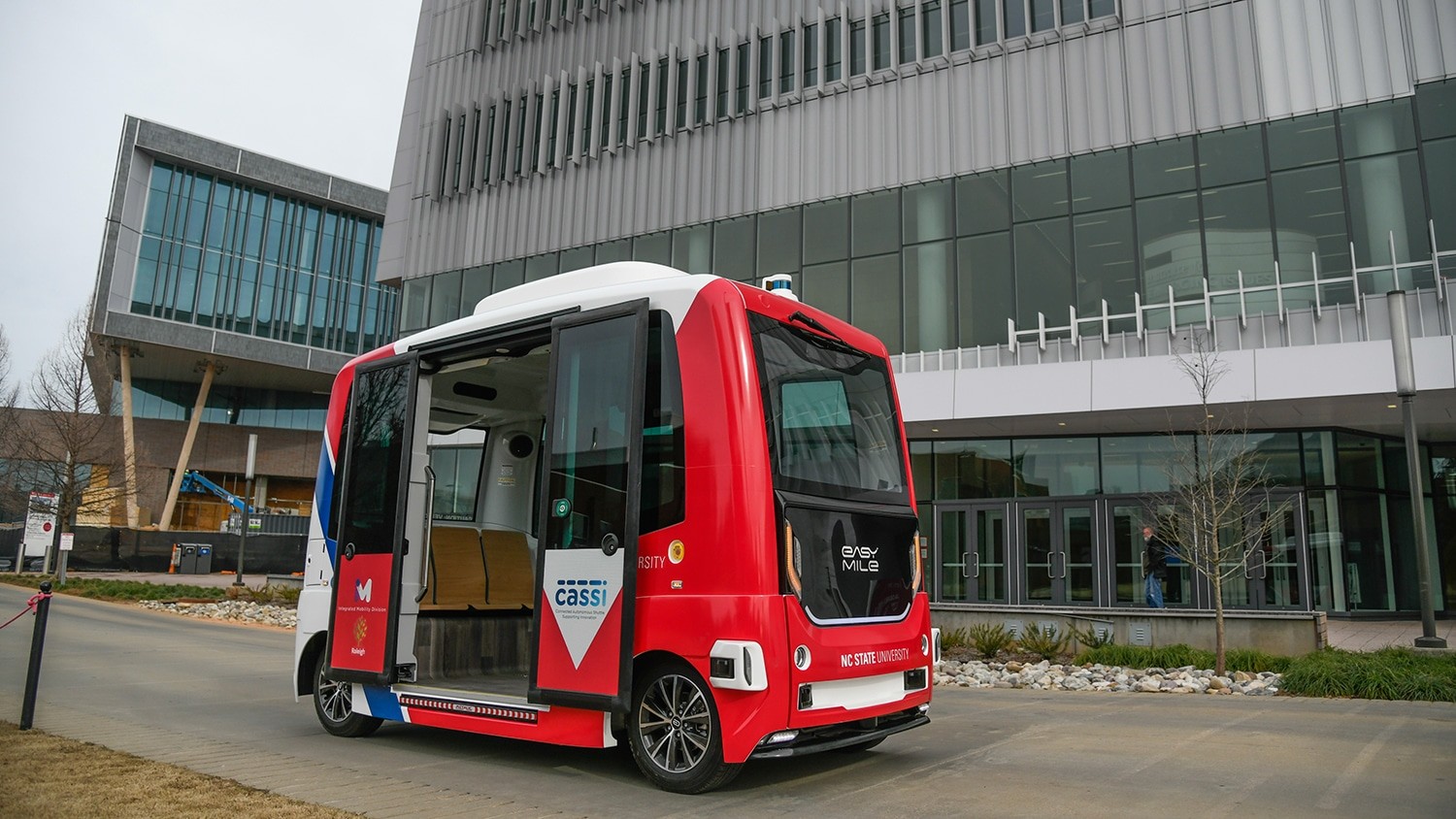 NC State isn’t cutting corners in the drive for innovation. Thanks to a partnership with the N.C. Department of Transportation, the university is testing an autonomous vehicle that can ferry 12 passengers.

It looks like a giant branded sugar cube, rolling on a continuous predetermined loop on NC State’s Partners Way, Varsity Drive and Main Campus Drive — all without a driver.

That’s what the Connected Autonomous Shuttle Supporting Innovation (CASSI) is: an innovative research partnership between NC State and the North Carolina Department of Transportation to launch the state’s first autonomous vehicle.

It’s a six-month pilot program that will use a specified route on Centennial Campus as a field lab for the autonomous electric vehicle, which was built by French transportation manufacturer EasyMile and operated by Free2Move. The EasyMile’s EZ-10 is the world’s most deployed driverless shuttle, can hold up to 12 passengers and completes its one-mile route in about 12 minutes.

Friday, NC State chancellor Randy Woodson and North Carolina Secretary of Transportation James H. Trogdon III will take the inaugural ride on CASSI, boarding just in front of Hunt Library. After invited guests and media have their turn, CASSI will open its doors to the public all day Friday and Saturday.

By federal law, there is an operator on board — but that CASSI ambassador is mostly there to provide answers to the many questions riders might have. Such as:

“As a research campus and innovation center, NC State’s Centennial Campus is the most appropriate place to launch North Carolina’s first autonomous vehicle,” says NC State Transportation Assistant Director for Planning and Operations Mike Kennon. “It adds value for our students, staff and faculty, as well as corporate and private partners, while also allowing the NCDOT the opportunity to do important research on an advancing technology.”

Above all, CASSI is a research project.

“We are focused on understanding how future technologies are impacting our infrastructure and our transportation network,” says Julie White, NCDOT’s deputy secretary of multimodal transportation. “We also want to know more about how autonomous vehicles will interact with our existing infrastructure, such as signal interaction, curb height and rider use.

“This is an opportunity to see all those things in action.”

NC State, and other college campuses, are great research labs because of the frequent use of multiple modes of transportation interacting with pedestrian traffic, White says.

The vehicle is designed to be a first- and last-mile solution for commuters and those with mobility challenges, says EasyMile Senior Vice President of North American Operations Sharad Agarwal.

“In general, that last-mile challenge is the biggest one we face in transportation, because — even though it’s a short distance — it is still the reason most people do not use public transportation,” Agarwal says. “The cost of staff people for other solutions is expensive, so we think, where feasible, an autonomous vehicle makes more sense.

CASSI also will be equipped with AERPAW technology, as part of NC State’s $24 million National Science Foundation grant to create a more flexible and adaptable 5G network. NCDOT will monitor multiple datasets on rider usage, deployment, safety and usability before selecting a new location for CASSI later this year.